The Celtic Underground Podcast No255 – My Celtic Life: Joe Craig 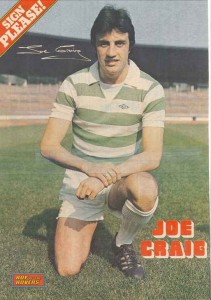 This week, fresh from getting 1 step closer to the Champions League we have St Anthony in conversation with another former Celtic hero – Joe Craig.

Craig, a striker, joined Partick Thistle in 1972 from Sauchie Juniors. After an impressive start, scoring seven goals in his first twenty games, he helped the club to the First Division title in season 1975-76. Joe signed for Celtic in September 1976 for £60,000 where he won the Scottish Cup and League Championship in his first season. He moved to Blackburn Rovers in September 1978 where he remained until 1981 when he joined Hamilton Academical. He retired in 1983.  Whilst at Celtic, he earned his only international cap against Sweden in April 1977. He started the match as a substitute and came on after 75 minutes and famously scored before having even kicked the ball, scoring a header just two minutes after replacing Kenny Burns.