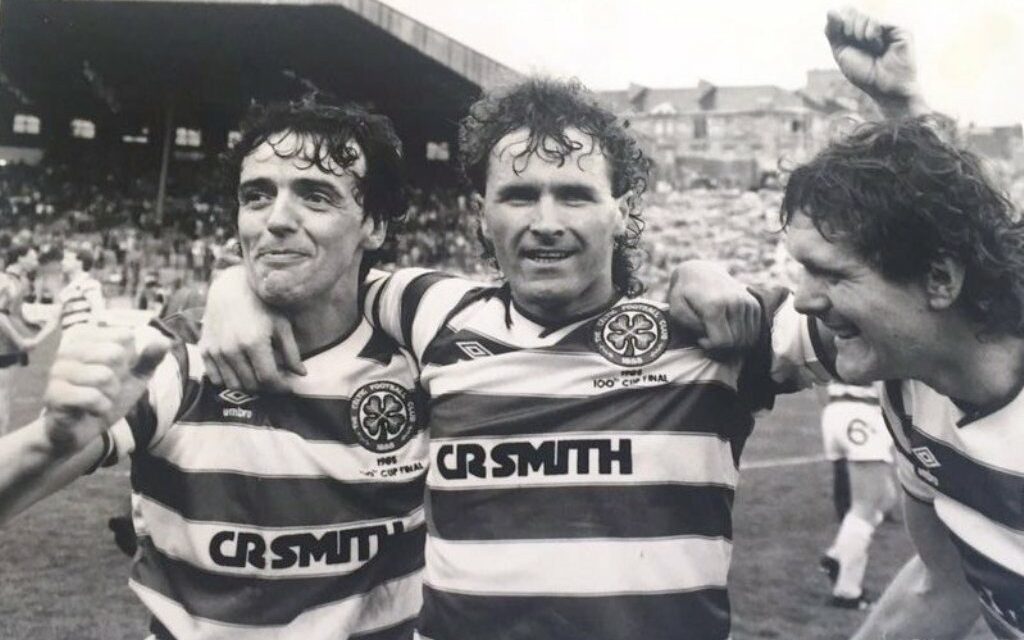 November marked St Anthony’s 50th anniversary of going to Celtic games. Here he looks back on 10 of those games which are most memorable to him.

1. 19 October 1974 Celtic 5-0 Hibs
I vividly remember thinking I wasn’t going to make this game as my dad was late home from work and I’d given up hope. However, he finally arrived back and we made it and although Dixie Deans grabbed the headlines with a hat trick, it was Jimmy Johnstone who gave a virtuoso performance on that October day. The wee man was magic and against a really good Hibs team which included Stanton, Blackley, Harper and Cropley. This was Jinky in the autumn of his days at Celtic but what a delight to have seen him even in his latter days. Remarkably, the teams met seven days later in the League Cup final at Hampden and Deans rattled in another hat trick in a memorable 6-3 win. Happy to say I was at that one too.

2. 11 January 1977 Celtic 1-0 Rangers
In the days when the Old Firm was still a thing, this was my first Glasgow derby, aged 10. It was a night time game which made my dad’s decision to take me all the more surprising. The last words he heard on the way out were from my mother, stating that if anything happened to ‘that wean’ then he wasn’t to bother returning. Fair play to the old boy for taking the risk. The game probably shouldn’t have been played. Rock hard icy, pitch with snow sept all around the perimeter of the pitch and the players playing in ‘sannies’. Some feeling when the winning goal was scored late on. We thought it was Roddy MacDonald bit was actually a Colin Jackson own goal. This was a Celtic team with some great player. McGrain, Dalglish, Stanton and Craig being the pick of them.

3. 21 May 1979 Celtic 4-2 Rangers
Simply referred to as the ‘4-2 game’ this was the night to end all nights. Winner takes all for the league title, bearing in mind Rangers had 2 games left but it was Celtic’s last game. Celtic 1-0 down after 57 minutes had Johnny Doyle sent off and that looked like the end of it. However, cheered on by an incredible Celtic support, the 10 men went into realms of folklore by roaring back to win 4-2 in the most amazing circumstances. As one observer commented, it was closest thing ever to a religious experience. Be in no doubt that the fans played a major role that night by sticking with the team and shouting themselves hoarse. Someone should write a book about it.

4. 2 November 1983 Celtic 5-0 Sporting Lisbon
A most surprising outcome when a very inconsistent Celtic side turned back the clock by playing like the Lisbon Lions. Having lost the first keg 2-0 in Portugal there wasn’t much hope for the return leg but there was magic in the air that night at Parkhead. Tommy Burns with a rare header and Brian McClair’s darting run and shot, were the pick of the goals but every single Celtic player was on top form that night. Burns and McStay controlling the midfield, Provan’s running and crossing on the right wing and the energetic and skilful McGarvey leading the attack. And all in a terrific new lime green change kit. Sadly, this fine Euro success was an oasis in a very big desert until Martin O’Neill’s days in the 2000’s.

5. 18 May 1985 Dundee United 1-2 Celtic
This was the strangest of Scottish Cup finals. For 76 United had the game in the bag. 1-0 up and in control as Hegarty, Narey, Gough and company, easily repulsed Celtic attacks with Jim McLean in the ascendancy, in terms of tactics. Then Davie Hay made the bravest of substitutions, taking off the hugely popular, Paul McStay, for Pierce O’Leary. To be quite frank, the fans thought Davie had lost the plot. This change allowed Roy Aitken to move into midfield and Celtic were then a team transformed. Chance after chance came and when Provan equalised with a glorious free kick there was only ever going to be one winner. McGarvey, typically full of heart, launched himself to score a dramatic winner with a header. Provan and McGarvey, two of the great Celts of my generation, took the limelight with the goals, which was most deserving. Sadly, within months, both of their Celtic careers were over.

6. 9 May 1998 Celtic 2-0 St Johnstone
The game which finally banished the misery of 9 utterly miserable years. With Rangers chasing 10 in a row it was imperative that Celtic won that day. I’ve never been more nervous and anxious before any Celtic game in my 50 years than I was in the lead up to this game. Defeat was utterly unthinkable. A new Celtic hero came to come to the fore. Henrik Larsson would have been a hero if only for his goal but in the next 6 years he was to go on to achieve legendary status. When Harold Brattbakk scored the second goal you could virtually hear the captive fetters which held Celtic back for years being smashed into pieces. A very emotional evening of celebration took place later in many places across the country and even further afield.

7. 20 March 2003 Liverpool 0-2 Celtic
For guys of my generation, Liverpool were always the benchmark for European achievements. Anfield, like Parkhead, a ground of legendary proportions. This was Martin O’Neill’s Celts, laced with quality such as Larsson, Mjallby, Lambert, Petrov and Sutton, against a fine Liverpool side with Owen, Gerrard, Hyppia and Heskey. Not only did Celtic win but they won well. On a selfish personal level there was a sense of revenge for stealing King Kenny from us in 1977. And, to their great credit, the Anfield crowd took defeat like sportsmen. A far cry from the attitude of Manchester United fans in the later Old Trafford Champions League ties in 2006 and 2008. For any Celtic side to win at Anfield in European competition, that is a wonderful achievement.

8. 16 April 2008 Celtic 2-1 Rangers
This was a must win game for the Celts. A bad tempered and physical encounter and there were a mere 3 seconds of injury time left when Jan Venegoor of Hesselink, stooped to head home a Scott McDonald headed cross. The noise from the Celtic fans was unbelievable, as the ball crossed the line, and there was an instant feeling, on both sides of the divide, that the tide had turned in Celtic’s favour. And so it transpired on a wonderful night at Tannadice in the season’s last game. Tommy Burns’ passing made it very emotional league title success.

9. 7 November 2012 Celtic 2-1 Barcelona
The night before this game I was fortunate to be in the humble setting of St Mary’s chapel, Celtic’s spiritual home, for the 125th anniversary Mass. There was something special in the air that night but a sobering thought that 24 hours later, Celtic would face the great Barcelona side of Messi, Xavi, and Iniesta on Champions League duty. Celtic carried a bit of good fortune but won 2-1 despite only having something crazy like 20% of the possession. Frazer Forster had the game of his life and repelled all the Barca attacks until injury time when the great Messi finally found a way past him. 125 years previously and Brother Walfrid was feeding the poor. In 2012 Celtic were beating the finest side in the continent on satellite TV.

10. 3 February 2022 Celtic 3-0 Rangers
I’m normally level headed when a derby game is approaching but I recall that night was the most fired up I had been for years. I wanted the kitchen sink thrown against Rangers that night to banish the memory of that Goddam awful lockdown season of 2020-21. This was the new Celtic with ‘Angeball’. I discovered I wasn’t the only one fired up. There were 60,000 others like me and Parkhead rarely looked as good as it did under the ‘Disco’ lights especially at the start when the stadium was plunged into darkness and a magnificent green light highlighted the Celtic huddle. Celtic blew them away and were 3-0 up at half time. If the first half was played with the heart then Celtic played the second half with the head and ran out deserved 3-0 winners. The tide had turned in Celtic’s favour once again and yet another league title was on the way.

Here’s hoping for more great memories in the years ahead.

With success in mind 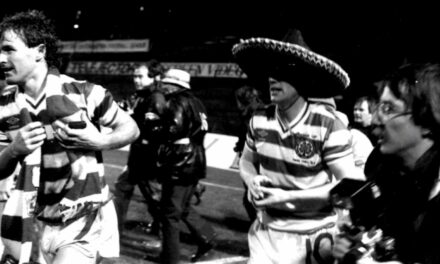 MEMORIES OF 1982 – OH HAMPDEN IN THE POURING RAIN