Today Celtic defeated Livingston by 4 goals to nil. That’s twice I’ve seen them play – they are not a football team, but a bunch of cloggers. A hard physical side who do their best to stop Celtic playing aided and abetted by sympathy reffing. Fair play to Gary Holt, his job is to have Livingstone playing at the highest standard they can and use the rules and refs as they are to achieve this and there will be a number of clubs in Scotland with much higher budgets who aren’t even in the same league as them.

From time wasting inside the first minute to kicking and fouling all game they are awful. From their style of play to their pitch and lack of fans – they sum up all that is wrong with Scottish football.

Anyway – we won and the managers and the enthusiastic Frimpong were available after the game. 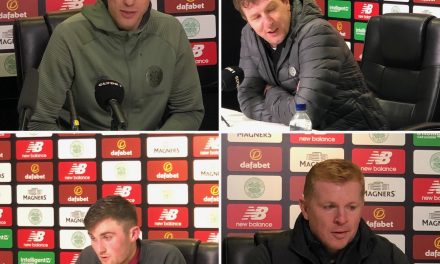