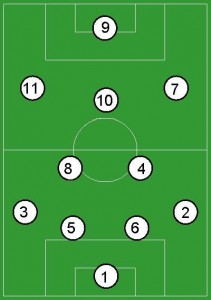 I’m not a big fan of international football for a variety of reasons. I don’t feel passionately about any country and for a lot of the time from mid 80’s onward I found the pace of play too pedestrian. Despite this I still like Scotland to do well, it enhances perception of our game and of course Celtic players will be representing their country and that reflects well on our club and so I watched the Scotland v Georgia game with disappointment but (fortunately for me) without the great frustration a fan would feel.

For me it was a typical performance from a Scottish side (club & country) over the last 20 years, not unlike ours in Sweden. Players filled with fear of playing that killer pass. Players with fear to get beyond their colleague and take procession in a forward position. In short, players who like playing the ball sideways because it’s safe.

As alluded to in yesterday’s piece, Scottish club sides (outside Celtic & Rangers) have been abysmal in Europe for 20+ years and the national side have also been poor relative to the preceding 30 years. For me, this in part down to expectation – the more we fail, the more we expect to fail but also down to the type of player we produce.

Around 15 years ago, under Bertie Vogts, the Scottish side was dreadful. The teams of 1996 & 98 had grown old and the youth following through was of no great standard. The club sides bought in foreign and the downward spiral began. In the last few years however we have seen a better quality coming through for the national team. Darren Fletcher, Scott Brown, James Morrison etc., tidy players who can pick up the ball in the middle of the park and pass. Players who could play the ball on the deck. The media and football commentators started to praise these new players coming through as Scotland started to pass short again….but pass sideways.

When Ronny Deila came to Celtic, I recall his comments around November that the midfield was “Still making too many sideways passes” and one of the things that really struck me when Scott Allan come on last week was every pass he made was forwards.

For the past 5 or 6 years the best Scotland players have been in the middle of the park. The defence has been average and with the exception of Maloney there has been no creativity in the final third. Players taking sideways passes in the middle of the pitch are under far less pressure than those in the final third. Taking and making passes in the final third requires more skill under pressure, provides less time to take under control and greater bravery from the player making the forward pass. Sideways is the easy out. Completed pass…job done?

Good tidy technical players in the middle of the park is certainly an improvement on where Scotland appeared to be going 10-15 years ago, but to be successful more is needed. I don’t know if it is lack of confidence in yourself or it’s down to coaching. More bravery, more confidence and reduced criticism is the key. Sideways is nice, but Scottish football needs to end the fear of going forward.