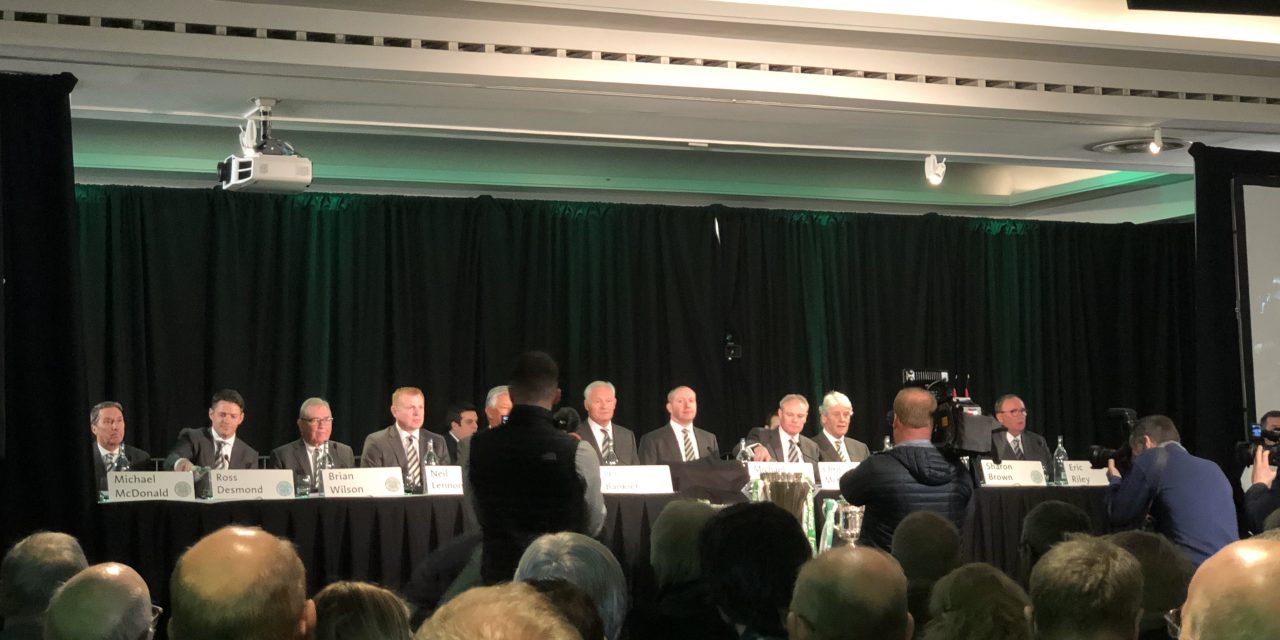 My first one-to-one meeting with someone at Celtic was with Brian Quinn. He had recently been booed by the support whilst making a presentation to the people of Villareal and Dermot Desmond had heavily criticised the fans for ‘rude behaviour’ when guests pere present. I wrote to Dermot and explained why I thought Brian had been booed. I explained that it hadn’t come as a surprise to me and the fact that it had come as a surprise to Dermot and the board illustrated the problem – that the board’s strategy seemed to be to the fans; “we’re good at what we do, we know what we are doing, leave us alone and you’ll see the results”.

He wrote me a short reply which I saw as a “Thanks for your opinion, now go away” letter, but at least he had the courtesy to stick his personal signature at the bottom. I was then contacted by Brian Quinn’s office and asked to go in for a meeting to discuss my points (it’s something I have found subsequently Celtic have done with other supporters, when they have written a reasoned, articulate letter). One of the things at that meeting that I talked about with Brian Quinn was this detached attitude. I didn’t think the club were treating the support with the respect they deserved. Although they gave me the courtesy of a meeting, unfortunately, too often that mushroom strategy (keep the fans in the dark and feed them shite when it comes to information) has remained.

Regular readers on here and listeners to the podcast will know my attitude to the board. They will know my voting record on the non-executive directors (all of whom have been in post far too long). They will know my attitude to Peter’s salary (it’s too high) and they will know my attitude to the structure of the club (we need a scouting network, a director of football and a  highly paid, elite, first team coach). But that doesn’t mean that concerns raised by others on different matters are more or less legitimate than my own.  During recent weeks we have had the Celtic Trust coming the fore with their objections to the board, a movement that has evolved from direct criticism of the manager to criticism of those who appointed him. I’ve read a lot online about people speaking for “The Celtic Support” but we are such a disparate group, that without a solid co-ordinated democratic vehicle putting our view forward, I think it’s dangerous to assume that the vehemence you read online in relation to the club, is mirrored everywhere through the support.

Roughly 30% of the UK population have a Twitter account. It goes to say therefore, that the majority don’t and it is a huge error that many people fall into when they assume that the echo chamber that they have created of like-minded views on social media is representative of wider views. That goes for politicians, companies and of course football supporters.

To individual supporters with individual needs, these questions matter, how patronising to say they don’t. Moreover, the people who ask these questions have taken the time and effort to take time off work to go to the AGM or, if retired, to get on public transport or drive a car to the AGM or to go at night to the Fan’s Forum meeting. The very fact that the detailed board question hasn’t been asked means that the people who deride those questions as being ‘not worthy’ haven’t bothered their backside to attend or don’t have the courage to stand up in front of 400+ people and ask their ‘very important’ question.

My criticisms of the board are long-standing, about the Neds being in place too long, about the structure of the club, specifically the management of the football division being incorrect, about wages being too high and about their communication and marketing being poor and specifically about them not engaging in the right way and treating supporters with respect. But if you agree on those aspects, but also deride anyone who asks a “unworthy” question, I would suggest you are also not treating your fellow fans with respect.

At times of agitated debate, whether it be on Brexit, the American election or Celtic’s performances, it would do us all well to remember that the vast majority are not participating in the debate on social media.  Social media is not the real world and whatever their opinions are, and they will be hugely diverse, there really is a silent majority.