Celtic FC, for their own reasons, announced that they would not be appealing the punishment. This action, or more accurately inaction, led to a frenzy of speculation within the ‘Celtic community’ online with well-known respected Celtic bloggers such as Phil Mac Giolla Bhain speculating (not without foundation) that the Celtic board would use any ‘guilty’ verdict from UEFA to increase pressure on the Celtic support to desist from singing overtly Irish Republican songs[ii].

However, UEFA’s verdict was not well-received by significant sections of the support. Message boards attacked UEFA’s stance, highlighting (again not without total foundation) perceived inconsistency by the European governing body on similar matters. Over the last 24 hours youtube footage, circulated by the ‘Celtic research’ twitter account,  has spread like wildfire showing Viktoria Plzen fans displaying an offensive banner about UEFA as well as setting off multiple flares and fireworks (See footage here: http://www.youtube.com/watch?feature=player_detailpage&v=HSX2Qi2sn5g). Others attacked UEFA’s attack on ‘free speech’, et al.

The ultimate ‘two fingers’ from certain sections of the Celtic support however came from some supporters who travelled to the Europa League away tie against Udinese. A banner was unfurled with the immortal ‘FUCK UEFA’ as well as multiple flares/fireworks also being set off, seemingly in an attempt to show their (individual) displeasure at Celtic’s ‘guilty verdict’ earlier in the month.

Unfortunately, this action proved to be merely a prologue to another UEFA charge:

UEFA has charged Celtic with “the displaying of an offensive banner and setting off of fireworks by fans” during Thursday’s match with Udinese. The incidents during the Europa League Group I match were included in the match delegate’s report. Uefa’s Control and Disciplinary Body will hear the case on 26 January. Celtic have already imposed a lifetime ban on the fan they say was responsible for the banner and assaulting a steward at the Stadio Friuli. Last week, Celtic decided not to appeal against the £12,700 UEFA fine for “illicit chanting” by some of their fans in the earlier Group I game against Rennes at Celtic Park.[iii]

This moronic action was a ridiculously short-sighted one by supporters coming hot on the heels of earlier disciplinary action from UEFA. This gesture did not serve a wonderfully satirical or witty retort to UEFA’s charges or verdict. It is noteworthy that the much-maligned ‘Green Brigade’ received much of the initial blame for this crass banner only for Peter Lawell to debunk those rumours. In some quarters, legal expertise has also dismantled the basis of UEFA’s charges and punishments with Gregory Ioannidis of CGV & CO LLC (as well as teaching at University of Buckingham school of law) raising important points such as asking where in UEFA’s DR’s does it include provisions for punishing ‘illicit chanting’ as well as raising the question of where exactly UEFA’s definition of illicit chanting actually to be found (see @lawtop20 for respective tweets). Nevertheless, as PAC noted in an earlier piece on Celtic Underground on this topic:

So it looks like we’re in hot water with the powers that be at UEFA again after the ‘banner’ display in Udine on Thursday. In all honesty I just can’t fathom the reasoning or logic behind the banner. A bunch of pissed up fans having a sing song and someone lights a flare…….fair enough. It happens at umpteen grounds around Europe on a weekly basis without raising an eyebrow and I believe one was deployed before the away game against Rennes and it didn’t warrant any column inches with press row. But that really is the junior partner in the charges which are being mounted against us. That ‘banner’ is what has UEFA’s teeth grating and God only knows what the potential consequences of this could be.[iv]

Many Celtic fans have, as is their want, pointed out the historic inconsistency and mis-government of UEFA – a body which has appeared to be largely toothless in its self-proclaimed ‘fight’ against different kinds of prejudice within its jurisdiction. The laughable ‘respect’ campaigns, with their fast moving, glossy adverts, etc mask an inability  to properly force associations and clubs to actively deal with social diseases such as racism and sectarianism.

However, all of this indignation from certain sections of the Celtic support is also a mask. Many Celtic supporters have slipped lately into whataboutery of the highest order while ignoring any analysis of this moronic behaviour by a small section of our support.

This contradiction though was well highlighted by Paul Brennan on CQN:

It will surprise no one that UEFA have charged our football club with “the displaying of an offensive banner and setting off of fireworks [sic] by fans”, this action was as inevitable as the dawn.  At least some of our number believes setting off flares in a football stadium is a reasonable action and that provoking European football’s governing body is a smart thing to do. In terms of protest, “**** UEFA” is not quite up there with Martin Luther’s Thesis or what we’ve witnessed in the Arab world this year.  It’s simple rebellious behaviour, which some of us are compelled by in our teens and a few take a long time to shake off.

As one poster also remarked on CQN:

The board have been saying for FIFTEEN YEARS they want certain songs to stop. How can they defend us being busted for those songs being sung? Who are you mad at? The board for 15 years of consistency or the guys who were warned time and again that this WOULD happen and so it came to pass? On the latest issue: if the banner had read “**** the SFA” “**** the Queen” or “**** the Huns” all would have run the risk of getting us into trouble. You see that right? UEFA sell worldwide rights, broadcasters don’t want to broadcast taboo words like that into people’s home. If the banner had said “UEFA are wrong” I don’t think that’d have caused a murmur.[v]

No doubt the perpetrators thought they were about to unleash some real hilarity or maybe even a cutting political gesture onto our psyche when they unveiled their work and were probably proud as punch with themselves. Unfortunately the reaction has been anger, disdain and to a certain extent humiliation. The anger and disdain comes from the manager and players who see it as grabbing attention away from a gallant efforts made to qualify for the Europa league last 32 against all the odds considering we were up against  a team a top of Italy’s Serie A as well as the fallout and possible sanctions from UEFA. The humiliation comes from us as Celtic fans looking at it in the cold light of day and having to admit “So that’s it huh lads? That’s the best you could come up with?”

UEFA have never been an enemy of Celtic. Indeed, one merely has to go back eight years for evidence of healthy respect for Celtic, and the Celtic fans in particular, that culminated in Celtic receiving the UEFA fair play award for 2003:

Celtic’s fans have been named the best in Europe by UEFA. The Scottish outfit’s supporters received the 2003 UEFA Fair Play Award on Wednesday for their behaviour during the club’s run to the UEFA Cup final last season.[vi]

Celtic supporters’ wonderful conduct and behaviour in Seville for the 2003 UEFA Cup Final even saw UEFA themselves create the ‘fanzones’ for major tournaments and finals in an attempt to recreate the wonderful atmosphere that day in southern Spain.

However, it is clear that the Celtic support has become complacent since this award was bestowed on them, with standards in conduct slowly slipping. In November 2008, Celtic were punished by UEFA after a Champions League home group match against Manchester United:

This pitch invasion had followed a similar incident the previous season:

“UEFA had previously warned the Glasgow club about the behaviour of their supporters, after a fan confronted AC Milan’s goalkeeper, Dida, during a Champions League tie last season. As a result of that, Celtic were ordered to pay a fine of £25,000, half of which was suspended for two years.”[viii]

In both cases, UEFA could have taken much more rigorous sanctions against the club. Thankfully, the currency from the ‘Seville season’ still had some weight with punishments kept generously low. While Celtic supporters continued to retreat to ignorance, they also indulged in schadenfreude when Rangers were summarily punished for their own transgressions in Europe:

UEFA has fined Rangers 40,000 euros (£35,652) and banned its fans from the next away European game for sectarian singing in a match at PSV Eindhoven. At a hearing in Nyon, Switzerland, UEFA also gave Rangers a suspended ban on its fans for a second away game for a probationary period of three years. UEFA also issued a suspended punishment for fans’ behaviour at the Ibrox leg. It will fine Rangers a further 40,000 euros and close Ibrox for one match if fans misbehave in the next three years.[ix]

Rather than act as a timely reminder to maintain levels of good behaviour, sections of the Celtic support still lived in blissful ignorance of these incidents and consequences to the extent that they believed untouchability was the order of the day. Constant references to ‘political songs’, ‘great record in Europe’, ‘fairplay awards’ as well as ridiculous quoting of Jock Stein’s and Tommy Burns’ remarks about the absence of football without the fans were regularly made by supporters who simply believed that Celtic would not be charged with any sort of offence never mind punished.

Over the last decade we have forged excellent relationships abroad with the relationship with Villareal being an excellent case in point. However, we have now lost the initiative after the ridiculousness of Udinese (and some would argue the moral higher ground). Again, as PAC pointed out:

“all of the arguments in the world about legitimacy, historical context and freedom of speech won’t change the fact that many groups ranging from the police, SFA, UEFA and public at large in the UK are not going accept “Oooh Aaah Up the RA” as a legitimate club anthem”[x].

It is time for Celtic fans to regain the lost standards of the last three or four years. This is not a call for a tartan army like transformation but one that asks Celtic fans to consider what helped establish such a good reputation, particularly abroad. Freedom of speech is one thing, but an inability to recognise one’s own foibles and shortcomings is a serious problem. Strangely enough, pissed up Celtic fans shouting disparaging remarks about the Queen of England and bawling ‘RA songs don’t go down well when we play in England for example.

We cannot allow our support, particularly online, to also slip some sort of bluenose-like mentality where debate is crushed before it even starts and self-reflection is dismissed as some sort of sap to our enemies. Put it this way – if Neil Lennon, after all he has been through, asks the support to desist from certain behaviours and songs then surely the least we can do is listen and take what he says on board. In the words of the great French moralist Joseph Joubert, “the aim of argument, or of discussion, should not be victory, but progress”. 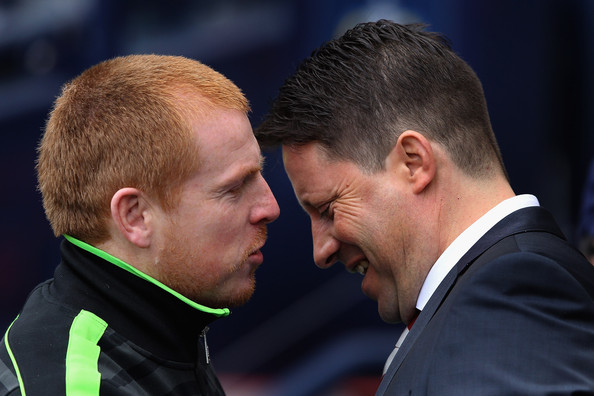