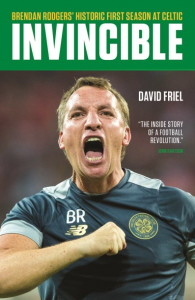 David Friel is a former journalist at The Celtic View and has previously written a Celtic Book – The Century Bhoys. If that wasn’t enough to put him off David has taken the bravery pills and dived into the world of football authors again to write about the Invincibles. We have a copy of the next book to give away and the question is at the end of the podcast.

David tells us about the book and that leads into a discussion about the marvellous past 12 months and specifically what makes Brendan so special.

The music is a tribute to Tony Hadley leaving 80’s band Spandau Ballet and also following my comments on the intro to Superstition last week, Andy Gronneberg suggested Waterfront – so there you go Andy.

You can get the book here

Podcast 127: We All Live In A Yellow Submarine