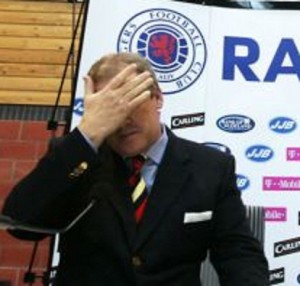 From 1997 until they went bust, Rangers defrauded the Scottish game and stole trophies.

Of course this has been a fact for some time with the admission over the “wee tax case”. The details of their fraud confirmed during the Craig Whyte trial when, under oath, former directors and people currently within the game confirmed that steps were taken to hide details of their outstanding debts to HMRC from Scottish football. This was deliberate in order to win games and obtain a European license as they knew without this their business was trading insolvently.

Today a final decision was made in the Big Tax Case. It was to reaffirm previous decisions that the Rangers use of EBTs was illegal.

Rangers cheated the whole of Scottish football and they did it deliberately and intentionally.

The confirmation of cheating and the defrauding of Scottish football raises clear and immediate questions that require firm and decisive action from the authorities;

With the Wee Tax Case predating the big Tax Case, this should be the title honours list this century in Scotland should be;

* Denotes no title awarded due to tax evasion and fraudulent submissions

It may be useful to revisit this recent podcast [click here]