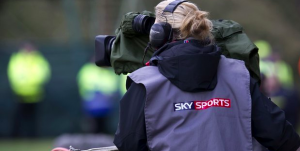 Cameras or no Cameras

Part of the appeal of a sport to an armchair fan is the production value of the television presentation. Most fans just sit down in front of the TV and consume, giving little thought to the efforts put in by TV companies to make the sporting spectacle truly come alive. Sports like golf are often better consumed on TV whilst poor production can ruin an event – for example I’ve never liked Arsenal because, growing up I didn’t like watching them on TV. Years later I realised this was because the TV camera position didn’t provide the optimum viewing perspective that you got at many grounds. Sky transformed football coverage in the UK with their multi-camera coverage meaning you were guaranteed the best angle to see the key moments in a game. They now have in excess of 25 cameras at every live match and these production values are part of the reason for the EPL success – in an image conscious era it looks “sexy.” But what about it’s very poor relative…Scottish football.

The game here is successful despite itself. You’d think otherwise from media coverage but we actually have the best-supported game in the world on a per capita basis. Sexy it is not! This season BBC Scotland have taken the bold step of moving their highlights package to a user-friendly time, one that accommodates the next generation of football fans and whilst the smallest journey starts with a single step, we are still far removed from acceptable television coverage of our game. There is only one problem – the farce of the number of cameras.

As part of the agreement between the SPFL and BBC Scotland, there was an insistence that 70% of top flight games had a minimum of 5 cameras for this season (I know, 20 less than EPL but it’s a start) with 100% 5 camera coverage next. This has all been agreed to except….it can’t be done because of the commercial deals the SPFL have already done!

On a typical 6 game weekend, Sky have a match and BT Sport have one, each with 5+ cameras. The problem then arises with the BBC Alba contract. BBC Alba get next pick of games after Sky & BT (and not every weekend has both covering so that is either the 3rd & 4th best game of the weekend or 2nd and 3rd). The BBC Alba contract does not stipulate number of cameras and herein is the problem. Sky and BT transmit their feed live and BBC Scotland get the taped version ready to create their highlights. BBC Scotland take their highlights feed and process back at HQ. BBC Alba content is processed as live at the venue and they don’t have the ability to process the feed from more than two cameras. As a consequence, every week, two of the top 4 games in Scotland’s top flight will only have two static cameras. Also as a consequence of the agreement between ALBA and SPFL it is impossible for BBC Scotland to fulfill their contractual obligations…you couldn’t make it up!

This season the SPFL and highlights partner BBC Scotland have taken steps to improve their product, but their own contracts and systems have prevented. Scottish football have HD cameras at EVERY game but BBC Scotland isn’t broadcast in HD! The SPFL have insisted that 70% of games this year and 100% next have 5-camera coverage of highlights – but have entered into a broadcast agreement that prevents it.

One day professionals will run Scottish football. On that day the game might start to rise to the standards the world’s best football fans deserve…One Day!