We’ll kick off with something topical – a Scottish Cup tie against Rangers. This news report shows the 1969 Scottish Cup Final, which saw Celtic run out emphatic 4-0 winners and wrap up the treble for Jock Stein’s side.

There is a good article on the game at The Celtic Wiki – including some excellent pictures if you follow the links.

A great clip from among the crowd of the suddenly popular Sammy scoring from the penalty spot at Ibrox in the New Year fixture.

He’s just saying what we all think.

Three clips in one. All from among the crowd.

Another golden oldie. This was a friendly match played just months before Lisbon. Despite the loss, the video gives a rare chance to see some extended highlights of the team which would soon be crowned Champions of Europe.

Documentary on the last of the world class Scots. Forget his role in the 99/00 season. Remember the Legend.

Speaking of Legends. A compilation on the career of the King of Kings.

Start with topical, end with topical. The 1980 Cup Final is remembered for two things. The first is a 1-0 win for the Hoops. The second is the on-pitch riot which followed. The video shows both.

The Celtic Wiki has a page on the match. Once again, follow the links for some top notch pictures. 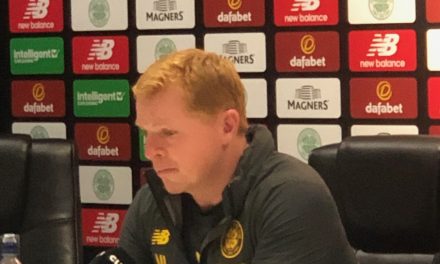