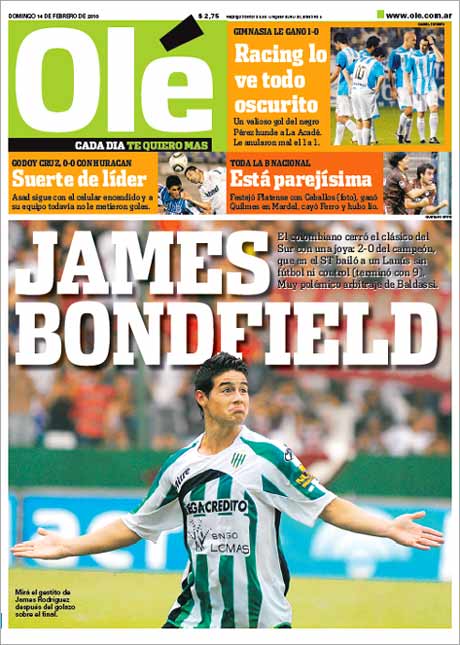 Firstly though, I would like to try to dispel a prevailing myth that Celtic, or British clubs in general, are unable to sign South American players. Although it may be true that Portugal and Holland for example have more open immigration legislation, many will have noticed the increased number of non-EU players allowed to play in the UK.

Although the UK’s legislation for immigration may not have changed, there now seems to be a tacit understanding that there will be a far more lax appeals process. It is under such a process that British clubs have been able to acquires the likes of Wilson Palacios, Luis Valencia, Maynor Figueroa, Lucas,  Denilson, David Obua and the twins Fabio and Rafael da Silva amongst others. Indeed the da Silva twins are an indication to how lax the appeals process has become, that when they both signed for Manchester United, not only had they not played or even been included in the Brazil squad, but they had not even played a professional game in the Brazilian league! Still though, they were provided with British work permits.

With cases such as these and the fact that Celtic seem willing to scour Asia to acquire players that will require a work permit appeal, such as Du Wei, Mizuno and Ki Sung Yeung, an obvious question arises; why does Celtic not look towards South America? The continent has been producing the world’s best players for the best part of a century and yet Celtic continues to put itself at a competitive disadvantage to other European clubs, by neglecting South America. Here are just four Colombian players that I believe we should be scouting;

If someone were to spend any amount of time in Medellin, Colombia and they were to listen to the local radio, they would hear the name Giovanni Moreno repeated ad nauseum. He is the constant source of discussion and after watching him play, it is easy to see why. This boy is one of the most interesting footballers I’ve ever watched. He was the record signing in Colombian football when he moved from Envigado to Atletico Nacional in 2008. As their number 10, he plays behind one stiker, but essentially he has a free role. Moreno likes to rove around the pitch linking up play and providing his team with a level of continuity and fluidity. Even as the second striker, on numerous occasions i’ve seen him drop back to just outside his own box to receive the ball from a goal kick, to either switch the play across the pitch or to proceed to slowly build up an attack. Needless to say this is probably an attribute that would be more difficult in the faster paced SPL, but it gives you an indication of the level of responsibility the he takes upon himself and indeed the confidence that he has in his own ability.

The Argentines have a term for this type of player, an ‘enganche’, meaning a hook. A player who links up his team’s play, provides his teammates with an ‘out ball’ due to his good movement and love to knit together his team’s play through keeping possession. A perfect example of an enganche would be Juan Roman Riquelme, of whom Moreno shares many attributes. He has a languid, relaxed style, an incredible eye for a defence splitting pass and a great long range shot. More than this, he is an exceptionally clever passer; not only does he frequently surprise the oppostion with his passing, but also the audience. On many occasions, whether watching in the stadium or on TV, i’ve watched him do something and have thought to myself, ‘I had no idea that pass was on’.

He is very similar to Riquelme, whom i’m sure he has modelled his game on, but also and perhaps unknowingly, he reminds me of a young Kanu, especially when he played a deeper role with Nigeria. Moreno must be about 6′ 3 or 4” and like Kanu, he is gangly and has a similarly laid back style, combined with excellent close control.

Finally, in the last year or so, he has made his breakthrough with the national team. He’s played four games so far, scored twice against Mexico and Chile and in another game against Ecuador he created both goals and was given man of the match. He is no longer just domestically known player, as was obvious when I watched a fifteen minute debate about him on Argentine television. As Jorge Bermudez, the Boca and Colombia legend said during the TV show, he is ‘talento puro’.

(During the Colombian pre-season break in January, Moreno acknowleded that he has had offers from Argentina, Mexico and Portugal, and admitted that he wants to go to Europe this summer to play for a Champions League team http://www.futbolred.com/liga-postobon/noticias/pretemporada2010/giovanni-moreno-admitio-ofertas-de-mexico-argentina-y-portugal/6909647  )

If Giovanni Moreno is Colombia’s new number 10, Jackson Martinez is the new number 9. Both 23, their emergence has forced Falcao, star of Porto and previously of River to be relegated to the bench for the national team. Though Hugo Rodallega is a decent player and has been successful at Wigan so far, he is being considered as fith choice striker for Colombia, behind the aforementioned and also Teofilio Guttierez.

But back to Martinez. First choice striker for Colombia with 3 goals in 5 games, this season he broke the record for goals scored in a Colombian league season. It is fair to say that he is a complete stiker-he has pace, scores with both feet, he headers the ball well and has a great leap, where he seems to hang in the air, almost Larsson-esque. He did this as he scored away from home in a crucial World Cup qualifier in Montevideo, by outjumping the goalkeeper. Unlike Steve Conroy, the South American referee allowed the perfectly legimiate goal.

Perhaps most impressive of all is that not only does Martinez score copious amounts of goals, but he scores in the biggest games. Away to America de Cali in front of 55,000, in both derby matches for Independiente Medellin against Atletico Nacional and in the in both legs of the final of the league (Colombia has a play-ff final to determine to champion), as well as goals in Colombia’s two most important recent games against Ecuador and Uruguay.

Last month he moved from Medellin to Jaguares of Mexico for just $2.5m. For Celtic, or indeed any other team, he would  have been an absolute steal. Still though, no doubt a move to a Champions League team would be appealing, although it is likely that his next transfer fee will be far higher.

Banfield is a sleepy suburb on the outskirts of Buenos Aires. As 2009’s Apertura Championship commenced, they hadn’t won the league in their 113 year existence. The previous season, Banfield performed well and attained a respectable mid table finish. However, nothing would have indicated that six months later, they would be crowned champions of Argentina, especially as the only major change to the team had been to play an unknown 17 year old, ,James Rodriguez, in the centre of midfield.

Now 18, the young Colombian played in every fixture of the Apertura season and helped transform Banfield into the best team in Argentina. Each time I watch him, he reminds me of Stilian Petrov; he has tremendous energy, making good late runs into the box, a good passing range and a powerful shot. Indeed his long range shooting is perhaps becoming his trademark; at just 16, he became the youngest foreigner in Argentine league history to score and he did so by scoring from more than 30 yards out. Since helping Banfield win the Apertura Championship, he has since scored each of the two Copa Libertadores games, South America’s equivalent of the Champions League, as well as winning man of the match against local rivals Lanus in the last fortnight.

It is only a matter of time before James makes his way across the Atlantic to play in Europe. Udinese of Serie A are trying to tie him up before the summer.

In the recent South American U17 Championships, Edwin Cardona was top goalscorer. This alone should make Celtic interested. However, the achievement is made all the more significant when you consider that at 16, he was a year younger than most other players, he played the entire tournament in midfield and that he was playing for Colombia, and not for the traditionally more sucessful teams osuch as Argentina or Brazil.

Since then his club and international career has advanced. He has guided Colombia to a semi-final place in the U17 World Cup beating Turkey and Argentina along the way. Furthermore, his team manager at Atletico Nacional, Ramon Cabrera, decided to ‘throw him in at the deep end’ by giving Cardona his full league debut away against America de Cali, in one of the biggest fixtures of the Colombian calendar and in front of more than 50,000 hostile fans.

Following his excellent performances for the Colombian U17 team and years of being hyped up due to performances with the Atletico Nacional youth teams, the Colombian public were at last about to see him on live TV…and he didn’t disappoint. Midway through the first half, he picked the ball up, turned his marker and from more than 30 yards, drilled the ball low into the far corner. He’d arrived.

Still just 16, he likes to drift out into space to receive the ball and then dribble at defenders. He has got good pace, very good close control and perhaps most impressively is that despite being so much younger than most of his teammates, he demands the ball and tries to orchestrate attacks. He is not yet the finished article-like many attacking midfielders of his age, he appears to try to do too much at times. Hopefully he will learn to give a simple pass more often, as he often needlessly loses possesion, though I suppose this is entirely natural for a player of his age and comparative lack of experience. Ultimately, this boy has talent. And rumour has it that his younger brother, Mateo, may be even better.

There are numerous other excellent Colombian players who I believe would do well at Celtic or in European football in general. Left sided midfielder Stalin Motta for Atletico Nacional is having an excellent season, Giovanny Hernandez has real quality as Atletico Junior’s number 10, though he’s now 33. Possibly I should have written more about Pablo Armero, a 23 year old left back/left midfielder for Palmeiras in Brazil, who may be the quickest player i’ve seen live-i’m sure he’d be a success in Europe.