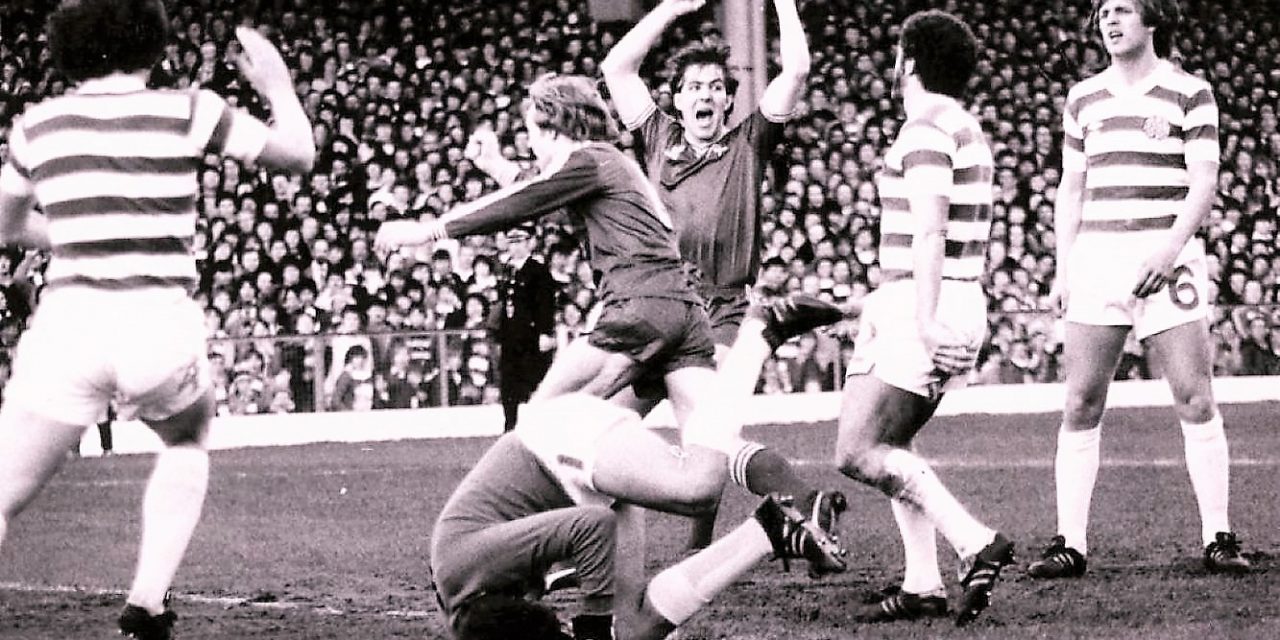 It’s nearly 50 years since I was taken to my first Celtic game or certainly the first game I can recall vividly. A lot has changed in that time and I wanted to use this article to look back at the teams and players from opposition teams whom I had admired and respected during that time.

In my formative years, Hibs were the team who I recall being most impressed with in the period of the early 1970’s. They became known as Turnbull’s Tornadoes due their swashbuckling style of play which put the emphasis on attack and Celtic v Hibernian games at that time were the premier fixtures in Scottish football in terms of the quality of football on display. Old Firm games may have been more exhilarating due to the fired up atmosphere and bigger crowds but Celtic v Hibs games also drew enormous attendances. The pick of the bunch of the Hibees side was their inspirational captain, Pat Stanton, who was coveted by many clubs. In later years Pat told me that he offers came in from Manchester United, Spurs and Chelsea but he had been happy each time that the club had informed him they had declined the offers. Every time this happened Hibs had raised Pat’s wages and what the club didn’t know was that Pat had no desire to leave Easter Road as he and his wife were very happy in Edinburgh, raising a young family. There were many other players to admire at Hibs at this time such as John Brownlie, an attacking right-back who was at one time rated a better international prospect than either Danny McGrain or Sandy Jardine, Alex Cropley, Jim O’Rourke and Alex Edwards, all fine footballers from that era. Hibs were most unlucky in that they came up against the greatest side in the history of Scottish football, in Stein’s Celtic, otherwise they would have had a couple of titles and cup trophies to add to their merits

As the 1970’s wore on Hibs declined and Aberdeen and Dundee United came very much to the fore. Aberdeen were inspired by the management of firstly, Ally MacLeod, and then, for a short period, Billy McNeill. Only the lure of the Scotland national team drew Ally away from Pittodrie were he had won a League Cup against Celtic in 1976 after thrashing Rangers 5-1 in the semi-final. MacLeod had forged a team around the experience of Bobby Clark, Willie Miller and Drew Jarvie and had made inspired signings in Dom Sullivan, Stuart Kennedy and the return of the prodigal son in Joe Harper. McNeill had taken over for a season in 1977-78 and ran Rangers tremendously close in both the league and the Scottish Cup He also made inspirational signings, none more so than the duo of Gordon Strachan and Steve Archibald, both for modest fees from Dundee and Clyde respectively, who would go on to enjoy phenomenal careers at home and abroad.

Aberdeen were obviously highly capable of picking exceptional managers as they proved when Alex Ferguson was their chosen candidate to replace McNeill when he returned to Celtic in 1978.  Fergie took the Dons to new levels never before thought possible in both Scotland and Europe. The European Cup winners’ cup and Super Cup were both won in 1983 and a number of top European clubs were vanquished along the way including Real Madrid, SV Hamburg, Bayern Munich and Ipswich Town, the then Uefa cup holders. Like Hibs, The Dons had several tremendous talents. The most impressive one for me was future Celtic manager, Gordon Strachan. On top form wee Gordo was unplayable and have the Dons a dimension they would not otherwise have had. Like Jimmy Johnstone in Jock Stein’s great Celtic side, he was the player who gave them the edge in big matches. Peter Weir, Mark McGhee, Eric Black and John Hewitt were all great players in an attacking sense but Strachan was the catalyst, the jewel in their crown. If not always fully appreciated by Ferguson or the Aberdeen support, his talents were very much feared and respected by opponents and opposition fans.

However, Aberdeen’s success wasn’t built on attacking flair alone. The backbone of the side was the defensive triumvirate of Leighton-McLeish-Miller who formed a seemingly impenetrable red barrier in front of the opposition attack. For those interested in statistics, Aberdeen won an incredible eight games out of twelve at Celtic Park between November 1979 and February 1983. The games all had an infuriating pattern. Celtic would hammer away at the Dons’ defence without success then Aberdeen would score on the break and then go on to take the game in a stranglehold. Another reason for Aberdeen’s success was their early use of defensive midfielders, something that was anathema to Celtic at that time, who always preferred stylish midfielders who were goal threats. Neil Simpson, Neale Cooper and Dougie Bell were all full of power and strength in the middle of the park and could destroy opposition talents with their fierce tackling and competitive nature. They say a team is a reflection of their manager’s nature and Aberdeen’s snarling aggression was very much a reflection of the young and highly ambitious Alex Ferguson.

Dundee United were the more modest part of what became known as the ‘New Firm’. Their manager, Jim McLean, complained of being a corner shop surrounded by the supermarkets within the Scottish game but this was very much deflection on McLean’s part. Of all the Scottish managers since Stein, McLean had the best tactical nouse which he out to fine use in European football. Barcelona, Borussia Munchengladbach (twice), Anderlecht, Rapid Vienna, Werder Bremen, PSV Eindhoven and Monaco were all put to the sword when United were at their peak under McLean. In November 1980 United to came to Parkhead to face Celtic in a League Cup semi-final second leg tie. Celts were favourites due to a hard fought 1-1 draw at Tannadice in the first leg. In the return tie, on a dismal wet Glasgow night, United tore Celtic apart in a way few sides could boast through the years in my time. Their attacking players, Paul Sturrock, Ralph Milne and Eamon Bannon destroyed Celtic that night for a deserved 3-0 win, which did not flatter them. Like Aberdeen, the foundations of United’s success were based in defence with the likes of Hamish McAlpine, Paul Hegarty, Richard Gough and Maurice Malpas. The jewel in United’s crown was David Narey who was generally deployed in a sweeper’s role behind Hegarty. The classy Narey read the game brilliantly and was the foundation of United’s success. It’s still amazing to think that United could hold on to such a talented individual for such a long period of time.

If there was a down side to McLean it was that sometimes he didn’t believe in his teams enough and put self-doubt in them, particularly in cup finals. Under McLean’s tenure United reached an incredible eight Hampden finals and yet lost every one of them. If ever there was a psychological barrier to winning this was it, with the press loving their descriptions of jinxes and hoodoos.

Alex Ferguson’s talents were actually forged in Paisley with St Mirren before he went to Aberdeen. Fergie’s newly promoted Saints took the Premier League by storm in 1977. His young, vibrant team gained many admirers with Frank McGarvey, Tony Fitzpatrick, Bobby Reid and Billy Stark being the pick of the bunch. St Mirren were a force within the Scottish game until the late 1980’s with a string of good players who moved on for big fees – Ian Munro, Frank McAvennie, Steve Clarke and Ian Ferguson. Saints were always a good footballing side in this era and the irony is that their 1987 Scottish Cup winning side weren’t a patch on some of the St Mirren teams who had come just previously.

I have tremendous sympathy for SPFL clubs in the modern age, out with the Glasgow big two. Turnbull, Ferguson and McLean were given time to build something special and could retain their best talents such as Pat Stanton, Willie Miller and David Narey. These days with the advent of the huge TV incomes which EPL clubs enjoy, it would be too easy for mediocre, middle range, English clubs to decimate Hibs/Aberdeen/United by poaching their best talents. When freedom of contract arrived in 1980 it gave the players more power over the clubs but the Bosman ruling of 1995 was the final nail in the coffin. Until that point Scottish clubs were due a fee for selling a player on and then, suddenly, anyone who ran down their contract could leave with no financial compensation for their club. This is the main reason that no provincial clubs have won an SPL title since Fergie’s Aberdeen team in 1985. A four year contract may sound like a long commitment but a talented player will now be sold after just two as the selling club will need to cash in, terrified that as the contract runs down, the less money they will get from any transfer fee.

If someone is to challenge the hegemony of Glasgow’s big two then it will predictably come from one of the big city clubs – Aberdeen, Hibs, Hearts or Dundee United. However, just as Celtic currently find it difficult to build a team due to the vultures of the big European teams picking off their best assets then it is similarly hard to see how one of those four clubs mentioned can compete with Celtic or Rangers over a 38 game season. For the sake of Scottish football it would be good for one club to step forward and at least compete for a period and make the league more credible and exciting.