Now first impressions can be important. Not all the time granted; I still chuckle when thinking about Giovanni van Bronkhurst’s unwise words when signing on at that other club who used to play in Glasgow.

When prompted for his knowledge about the atmosphere during Glasgow derbies the Dutchman admitted he’d already been to one the previous season, sitting with the Celtic faithful in seats provided by his good chum Henrik Larsson. Cue awkward looks being shared by whichever EBT-paid goons were doing the tour of the marble staircase that day.

Victor Wanyama’s introduction went much smoother; on 9th July 2012 he arrived from Germinal Beerschot and he immediately began to win us over. Now we Celtic fans have had our fair share of badge-kissing phonies, but there was something utterly charming about this kid, coming from the developing world, and choosing 67 as his squad number.

The only way we as club can dream of signing A-list talent these days is to get them when they’re young/naive enough to believe we’re an A-list club. If an appreciation of Stein, Lennox, Murdoch et al’s legacy is what it took to get this promising young footballer in a Celtic jersey – then all we can do is applaud his decision and hope that he turns into half the Celt they all were.

When Wanyama’s competitive debut came a month later it was a disaster with the Bhoys going down 1-0 to St.Johnstone at home. For the next few months it was stop-and-start for the Kenyan and his team-mates as Neil Lennon’s team seemed all-too-eager to throw away another title.

When Wanyama came on as a half-time substitute against Kilmarnock on 15th October, Celtic were trailing by three goals and sitting third place in the SPL. Then everything changed. Anthony Stokes deserves a mention for his Herculean performance that day dragging Celtic back from the brink, but Wanyama’s introduction in midfield saw an epochal change in the way Celtic would play for the rest of the season. With Wanyama at the base of midfield everybody in the team’s job got much easier, Celtic stopped letting in goals.

Over the next few weeks Celtic’s season started again; games in hand were won, rivals faltered and the Bhoys started to play consistently well. Five league wins on the bounce confirmed this progress with Hearts visiting in early December. The Edinburgh club did what most SPL clubs hope to do when visiting Glasgow. It was tight and annoying and seemed like being one of those afternoons.

But big Victor had other ideas.

In the 72nd minute with Celtic pragmatically launching balls into Hearts’ penalty area one such hoof was half-cleared and bobbled around on the edge of the box. Daniel Majstorovic and Scott Brown completed well to retrieve possession before Charlie Mulgrew cleverly nipped a short pass toward our giant number 67. Nobody in the stadium had any expectation of what was about to happen as Wanyama took one good first touch and pirouetted 180 degrees to face the goal. Without as much as a step, VW leaned back and smashed the ball into the top-corner from 25 yards. It was a strike so pure and violent it could only have been struck by an African. It was Tony Yeboah. It was Patrick Mboma. It was the late Rashidi Yekini. It was a furiously good goal and pushed Celtic toward another vital three points.

It could be argued that afternoon was Celtic’s last real test in the league. In the following months before being crowned champions Celtic played like just that. Along the way Victor chipped in with three more important goals. A neat back-post volley to seal the points against Dunfermline, an imperious header against Dundee United and then another fine strike against the Jambos at Minibrox.

These were his key individual contributions but it was his presence that turned Lennon’s Celtic into a winning side. Like the best deep-lying midfielders (his gaffer included) he made everyone else next to him a better player. Midfielders were liberated to attack knowing he’d provide cover and the same could be said about our defence. There’s simply no way our deserved Scottish Player-of-the-Year Charlie Mulgrew could’ve had the season he’s had if not for playing in a side which was constantly in control. It’s Victor Wanyama who brings that control, that dominance, to this title winning Celtic squad.

In the closing weeks of the campaign Wanyama’s form varied as his manager experimented using him in various different positions. He picked up a daft and deserved red card at Ibrox for making a silly challenge with two feet. Nobody enjoys losing at that shit-tip so it could be easy to be overly-critical of our new hero – then we remember he’s 20 years-old. This fact is frankly baffling. At this young age Wanyama is a breath-taking athletic specimen.

Some of us have been fooled before; Gordon Strachan certainly was when he signed Evander Sno. But Sno proved to be a hopeless big waddling penguin with no imagination or character. VW already looks like the real deal.

Here’s hoping the big man takes Celtic into the knockout stages of the Champions League during his early twenties, because he’ll definitely be playing there regularly for a club much richer than ours later on in his career. But until that sad day when he leaves, let’s all sing:

There’s a Bhoy in the Hoops called Wanyama… 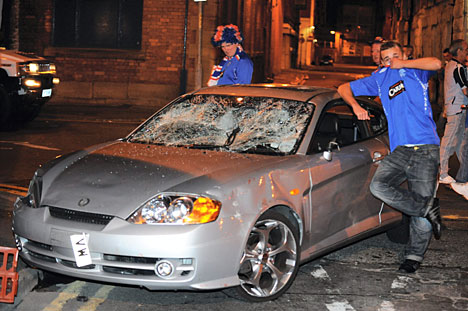