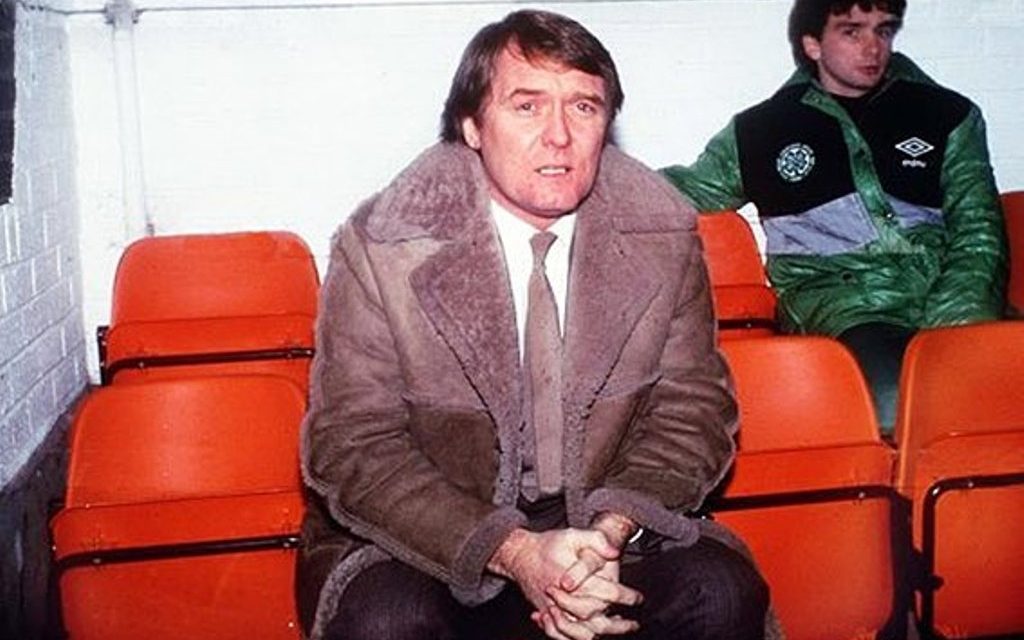 The summer of 1983 remains the most acrimonious I can ever recall as a Celtic supporter. Billy McNeill had been Celtic manager for five years and had built a fine team which looked destined to achieve great things. However, unknown to most of the fans, there was growing animosity between McNeill and the then Celtic chairman, Desmond White. White was an autocratic character who was the most powerful figure within the club. There was clearly a clash of personalities between manager and chairman that had been fermenting for some time. Matters came to a head when White ordered McNeill to sack his assistant manager, John Clark, and when McNeill refused there was a public clash which resulted in McNeill, then without a contract, resigning from his Celtic post to accept an offer to manage Manchester City.

Celtic moved quickly to offer the vacant managerial role to ex-Celt, David Hay, who had then been out of work for a full year Hay was largely inexperienced as a manager but had enjoyed one fine season at Motherwell during 1980-81 when his ‘Well team had ran away with the First Division title in entertaining style. He had then resigned to accept a ‘dream’ job in America in 1982 but it had fallen through and the Fir Park club had appointed Jock Wallace as Hay’s replacement. Hay had his work cut out from the start at Parkhead as White had actually appointed Frank Connor as Celtic’s new assistant manager, even before he had been appointed, so he was not able to choose his own assistant. He had also lost the twin strike force of Charlie Nicholas and George McCluskey, to Arsenal and Leeds United respectively. There was no surprise in Nicholas leaving but McCluskey, a huge favourite with the Celtic support, was a major loss as he was a Celtic man at heart and, despite Hay trying to get him a better deal from the parsimonious Celtic board, the offer to McCluskey was described as derisory and George was then bound for Yorkshire.

Hay had inherited a fine team from McNeill and much was expected of them. In 1983 there was stiff competition in the Scottish game. Aberdeen, under Alex Ferguson had won the European Cup Winners Cup in May by defeating Real Madrid in the final, and Dundee United were Scottish champions for the first time after narrowly pipping Celtic to the title on the last day of the season.

In Hay’s maiden season of 1983-84, Celtic finished second in the league to Ferguson’s Dons, without actually mounting a serious challenge for the title. They had performed well to reaching the two domestic finals and fate was to decide that Davie Hay would end the season trophy-less. In March 1984, in the League Cup final, Celtic had been strong favourites to beat an underperforming Rangers side, having beaten the Ibrox men twice already in the league. On the day Rangers rose to the occasion and were 2-0 up until Celtic mounted a fine fightback to level at 2-2 and take the final to extra time. In the extra period Rangers were awarded a soft penalty by the referee Bob Valentine. Even then, Celtic goalkeeper, Pat Bonner had saved Ally McCoist’s penalty, only for the ball to break kindly to McCoist to score the rebound. Had McCoist not scored that rebound then it can be reasonably assumed that he would not have survived very long at Ibrox. As it was, Rangers won 3-2 and history took a different course.

If refereeing decisions had been harsh in the League Cup final things were to get worse in the Scottish Cup final in May against Aberdeen, the newly crowned League champions. Aberdeen’s first goal had been controversial given that Eric Black had looked offside and a Celtic defender had been obstructed. Worse was to come before half time when Roy Aitken was ordered off after a clumsy tackle on Dons’ striker, Mark McGhee. Valentine was again the referee and it was difficult to see how he could order Aitken off when he hadn’t even been booked. It was a yellow card offence but never a straight red. Ten man Celtic bravely fought back to equalise through Paul McStay and take the game to extra time. Celtic were arguably the better team on the day but a terrible blunder by Pat Bonner cost them the final when he badly misjudged a cross to allow McGhee to score the winner.

Davie Hay had put pressure on himself in an interview by claiming he would consider resigning if he did not win a trophy. Somewhat humorously, he had pointed to a youth cup final win as evidence of silverware and he then made plans to improve the team for the new campaign. According to press reports that summer of 1984, Celtic made bids for David Narey, Paul Sturrock, Davie Dodds (all Dundee United), Neale Cooper (Aberdeen) and Joe Jordan (Verona). Celtic missed out on them all and this made them look amateurish that they couldn’t get any deals done.

Celtic obviously had money to spend and that came to fruition in October 1984 when Hay sensationally signed Mo Johnston from Watford for a Scottish record fee of £400,000. Johnston was a real coup, he had made a great impact at Graham Taylor’s Watford and had established himself as Scotland’s main striker under the influence of Jock Stein. This signing gave Celtic a great boost and they disposed of Ghent in the European Cup Winners Cup before facing Rapid Vienna. Celtic had lost the first leg 3-1 but on a wonderful Parkhead European night the Celts had disposed of the Austrians by 3-0 with a terrific, disciplined performance. It had been a bad tempered affair and the Austrians had complained about a bottle which had been thrown from the Jungle enclosure. The bottle had not struck anyone but an Austrian player feigned injury and Rapid made an appeal to UEFA who then demanded that the game be replayed in a ground 200 miles from Celtic Park The game was played in Manchester at Old Trafford and Celtic lost 1-0 to be eliminated. The infuriating thing was that Rapid then faced modest opposition (Larissa and Moscow Dynamo) to reach the final against Everton. Celtic fans to this day maintain that had they enjoyed the same draws then they would have faced Everton on that memorable occasion in Rotterdam and Davie Hay would have been the second Celtic manager to take a team to a Euro final. As it was Hay and his players had been unfairly deprived of that chance. To make matters worse, the next European tie against Atletico Madrid in October 1985 had to be played behind closed doors, and after a terrific draw in Spain, Celtic lost 2-1 to the Spaniards, their chances damaged badly by the lack of a vociferous Parkhead crowd to get behind the team on the night.

Celtic won the Scottish Cup in May 1985 by beating Dundee United in very dramatic circumstances after Davie Hay’s brave tactical switch to withdraw Paul McStay for Pierce O’Leary and pushing the inspirational Roy Aitken into midfield. In the autumn of 1985 Hay had suffered more bad luck when the talented winger, Davie Provan, an architect of the cup final win, suffered from the debilitating illness, ME, which eventually resulted in his retirement. Provan was a player that Hay never managed to replace and Celtic then lost a lot of their attacking focus. In early 1986 Celtic went on a fine unbeaten run to pip Hearts on the last day of the season to win the title. These two successes in consecutive years had boosted Davie Hay’s credibility but Scottish football was about to change dramatically.

Under performing Rangers appointed Scotland captain, Graeme Souness, as their new player manager for season 1986-87. Souness was backed by a hugely ambitious new Rangers’ board and embarked on a signing spree never witnessed in Scotland until that time, when he had brought in several expensive England internationalists from south of the border. Celtic and Rangers came head to head for the season’s first trophy when the League Cup was contested in the 1986 final. Again there were controversial discussions from the match official which went against Hay’s team. Firstly, Rangers were awarded a soft penalty to win the game at 1-1 when Aitken and Terry Butcher clashed in the area in what merely looked like two big men colliding. Then near the end young Celt Tony Shepherd was sent off when referee, David Syme, thought Shepherd had mistakenly struck him. Shepherd was recalled but Mo Johnston was also sent off. Infuriated by Syme’s display, Hay then stated in the press that if he had his way then Celtic would withdraw from Scottish football to play in England, so aggrieved was he at the perception of refereeing bias against Celtic in big matches.

At New Year Celtic enjoyed a healthy lead over Rangers but their defence still appeared notoriously fragile. Hay approached the Celtic board for funds to purchase Scottish centre half Joe McLaughlin from Chelsea and full back Steve Clarke from St Mirren but Celtic bid low and missed out on both targets. This helped to result in a mediocre period in late winter/Spring of 1987 when Rangers overtook them to win the league. There were huge howls of frustration from the Celtic fans and the board eventually released funds at the season’s end when Irish international centre half, Mick McCarthy, was purchased from Manchester City for a cool £500,000, as Hay laid plans for the next season. However, this would be a case of too little, too late for Davie Hay.

The summer of 1987 represented Celtic’s 20th anniversary of their European Cup success. At a club function to commemorate that Lisbon triumph, Billy McNeill had been an enormous success giving a speech to the supporters. McNeill was recently sacked by Aston Villa and was looking for a new managerial role. The Celtic board, said to be impressed by McNeill’s rapport with the supporters that night, then made the dramatic decision to sack Davie Hay and install McNeill as new manager. Hay’s four year reign as Celtic boss was now over in the most dramatic of circumstances.

Looking back, fate was certainly not kind to Davie Hay. He was brought in as manager in 1983 at a very difficult time in the club’s history and there were three major domestic finals in which refereeing decisions had been a contributing factor in Celtic losing. The Rapid Vienna affair had perhaps been the unkindest cut of all as reaching a Euro final would have been a notable success for any Celtic manager to boast. Davie Hay lamented in later years that Celtic had sacked a better manager in 1987 than they had appointed in 1983, which certainly has an element of truth in it. He had to contend with an ineffective board, poor refereeing in major finals, and even clandestine politics within UEFA. Davie Hay was so close to being a really successful Celtic manager. If only lady luck had been kinder to him then who knows what he could have achieved?