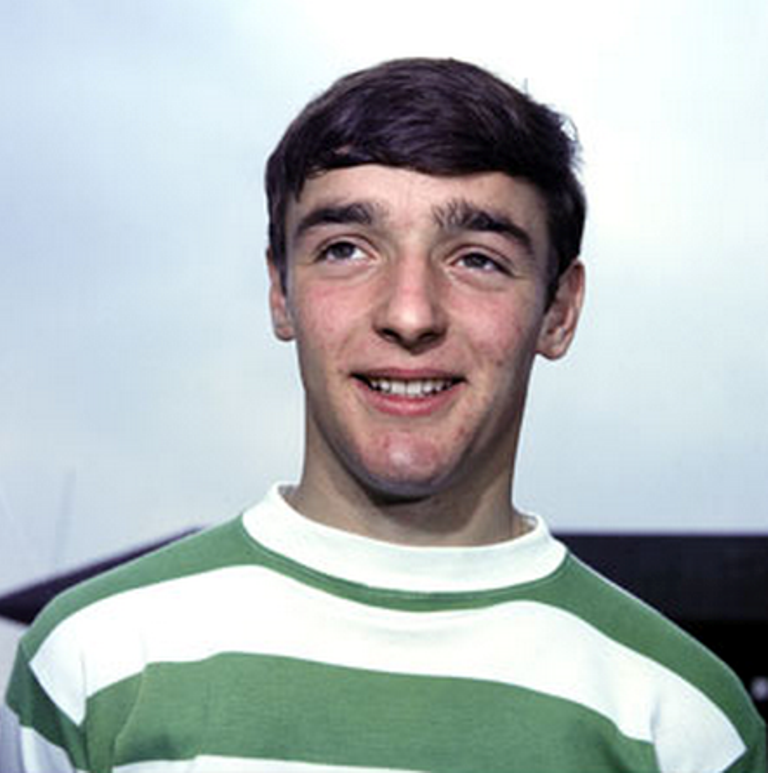 Through the years I’ve never subscribed to the fascination of having a favourite player, much preferring to appreciate the efforts and talents of the Celtic team as a whole. I’ve had plenty of friends and acquaintances who have been obsessed with the likes of Johnstone, Dalglish, Provan, McStay and Larsson.

When I was young I lived in Govan and there was an Italian family who stayed in our close called Franchi who hailed from Florence. We always pronounced it as ‘Fran-shay’ when the correct pronunciation is actually ‘Frankie’ and the two girls, Elia and Lucia, were my best friends at a young age. Elia was the oldest and was a real tomboy, absolutely football mad. She and I would play football in the back court and because of her Italian heritage she would insist on being Lou Macari in our football games with me opting for Jimmy Johnstone or Bobby Lennox.

In the early 70’s Lou Macari seemed like an exotic creature in this dull country we live in. He had a wonderfully unusual name and the press were always attracted to him given his Italian extraction. In 1972 when Celtic played Inter Milan in the European Cup semi final the Italian press corps were infatuated with the young Macari because of the Italian connection and found it hard to comprehend that an Italian Scot was up against them.

What also made Lou different was he was an excellent player. A sniffer, a poacher, who could bag goals out of nothing and defenders hated playing against him because he was a niggly wee guy who was always snapping away at the heels of those bigger centre halves. In his early days Jock Stein compared Macari’s finishing ability to that of Jimmy Greaves and the big man wasn’t noted for making extravagant comparisons of that sort. 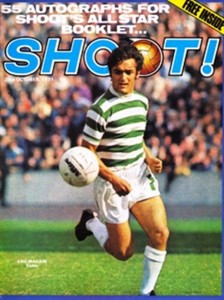 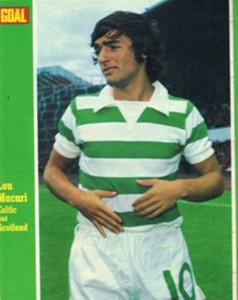 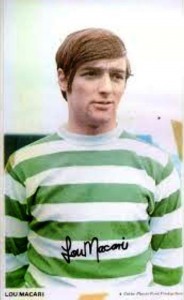 Celtic fans loved wee Lou and had a few notable chants in his name. ‘Lou, Lou, skip to my Lou’ was probably the most common one and it should be noted that the Ibrox choirboys of the time had their own more obscene version. When I heard the popular ‘We’ve got Harry…and Lou Macari…and Kevin Barry’ chant at a young age my Father explained to me that Kevin Barry was a Celtic player in the 1950’s so reluctant was he to go into an explanation with his young son about something of which I wouldn’t understand anyway.

Lou was very much a man for the big occasion and when Celtic drew with Rangers in the 1971 Scottish Cup final the Celts’ forwards had missed a plethora of chances. Lou was Celtic’s substitute that day and for the replay he was thrown in from the start as replacement for Willie Wallace and he showed his sharpness by scoring an opportunist opening goal, Celtic going on to win 2-1, much easier than the actual result suggests. In the 1972 Scottish Cup final he was part of the team who ripped Hibs apart by 6-1, scoring twice in the process. He scored a dramatic goal against Ujpest Dosza at Parkhead in March 1972 with the cutest of lobs over the Hungarian goalkeeper which took Celtic to the semis against Inter Milan. Macari was a great goal scorer and was a real asset to Celtic at this time.

Part of the reason Celtic fans took to him was the effort that he put in against Rangers. Lou never hid his dislike for our Glasgow rivals and this went down tremendously well with the hardcore element of the Celtic support.

Macari was actually only a first team regular for three seasons but such was the impression he made that he became a highly sought after commodity with the big English teams down south. The parting of the ways was sewn in the summer of 1972 when Lou was the only Celtic player to travel with Scotland on their tour of Brazil. McNeill, Murdoch, Johnstone and Dalglish were all required in the Scots’ squad but Jock Stein managed to persuade (or intimidate) all four of them into refusing to go for various reasons. Stein thought the trip was too far and too long and wanted his stars fully rested over the summer months for the new season in August. However, Lou rebuffed all Jock’s efforts to dissuade him from going which showed that the young Macari was very much his own man and was a strong willed character as well. 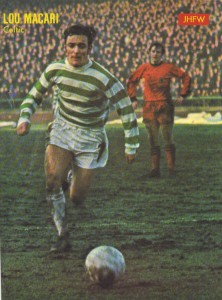 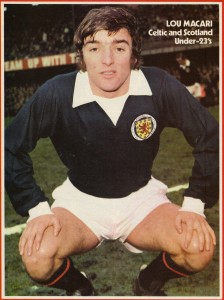 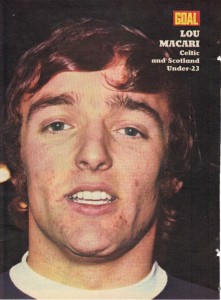 It was on this trip that Lou learned of how much the Anglo Scots players earned and this turned his head somewhat. The Scotland manager was the ex Celt, Tommy Docherty, and when Manchester United required a new manager in the early winter of 1972, the Doc was their man and Lou was his first target. By this time Lou had married an American girl in Saint Patrick’s cathedral in New York and perhaps he had a more cosmopolitan attitude at this time compared to other Celtic players.

Older Celtic fans will tell you that Macari was causing a bit of distress behind the scenes at Celtic Park at that time with several controversial newspaper interviews and rather than tolerate a troublesome personality in the dressing room, Stein decided it was time Lou moved on. Celtic at that time had an embarrassment of riches in their forward line with Johnstone, Dalglish, Deans, Hood, Lennox and Macari all vying for three places in the attack. Lou was, arguably, not even a guaranteed starter in the first eleven and Stein did good business in obtaining a massive £200,000 transfer fee from Old Trafford. He was a loss but not to extent that Davie Hay would be missed in 1974 or Kenny Dalglish in 1977, both of whom who were virtually irreplaceable.

Macari showed his single mindedness again by sensationally snubbing Bill Shankly’s advances to bring him to Liverpool in order to go to Old Trafford. This was not the greatest career move as Liverpool would be come the dominant force in European football for the next 10 years.

The strange thing is that United converted Macari from an ace goal scorer to being a deep lying midfielder and success was hard to come by, United even being sensationally relegated to the second division in 1974, on the very same day that Celtic celebrated their 9 in a row league title win at Brockville.

In 1976 Manchester United came up for the Johnstone/Lennox testimonial and Lou stated publicly that he could not bring himself ever to play against his beloved Celtic. However, by 1980 he had a change of heart and decided to play for United in another testimonial game at Parkhead for his great friend, Danny McGrain. United actually made him captain for the occasion and he was given a rapturous ovation from the Celtic fans in the Jungle.

Somewhat curiously, the fans in that same area two years previously had given Kenny Dalglish absolute dog’s abuse when he returned in a Liverpool jersey and it was claimed that the Pope would have received a better reception at Ibrox. This still annoys me intensely to this day because Dalglish gave infinitely more to the Celtic cause than Macari ever did and was a consummate professional as well. 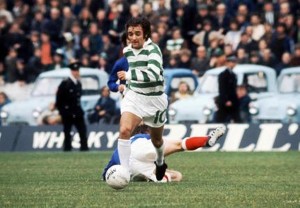 In 1984 Macari was given a testimonial for his eleven years service at Old Trafford and Celtic were his chosen opponents. Lou contented himself by playing for United in the first half and Celtic in the second half in what was an entertaining game and his pockets were well lined by the 15,000 Celtic fans who travelled down for the occasion.

Looking back after all these years we should appreciate Lou’s efforts in the hoops and he was part of a fantastic, attacking, Celtic team in perhaps the most successful period of the club’s history.

It’s just a pity he couldn’t have saw fit to have hung around Parkhead for a good while longer.