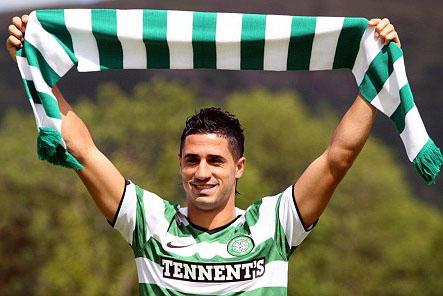 The key to the side’s renaissance is the return from injury of Israeli midfielder Beram Kayal – this guy’s ruddy brilliant. His speed, spirit and savvy for knowing when and when not to dive in is unlike anything I’ve ever seen in a Celtic shirt.

His infectious attitude is radiating onto colleagues like Joe Ledley and together they’re making Celtic very difficult to play against. I’ve seen some decent Celtic teams down the years, but never have I seen one so quick to retrieve possession when lost. It’s all very good playing nice football when you have the ball, but if you surrender possession cheaply, which Celtic are doing less-and-less by the week, you’ll always give your opponents a chance.

Neil Lennon’s Celtic seem very reluctant to do that. At 1-0 up against Aberdeen this evening, the ball retention of Paddy McCourt, Mark Wilson, Charlie Mulgrew, Scott Brown and others was a joy to behold. Finally a Celtic team that seems to know how football should be played.

With this shield mentality making our defences job relatively easy, our attacking outlets have the free reign to batter teams. Celtic’s clinical operators here are the excellent Gary Hooper and the very good Anthony Stokes. In a week when Newcastle United earned £35 million selling Andy Carroll to Liverpool – one must ask just how much Celtic’s front two are worth? The pair have both already hit double figures in the scoring charts and one gets the feeling they’re just clicking into gear. Tonight they laid on a goal each – Hooper’s in particular after an exquisitely tight one-two which wouldn’t have been out-of-place in the Nou Camp performed by Andrés Iniesta and David Villa. Hooper is 23 and Stokes is 22 – these Bhoys are only going to get better.

Thanks to injuries, Celtic are about to encounter something of a defensive a crisis at a key point in the season. But the way we are playing would suggest it might not be an issue, as long as we don’t let our modest SPL opponents anywhere near our goal – which seems to be the plan.

Barely six weeks ago I was asking serious questions of Neil Lennon’s reign. To his credit his side has found a gear and are looking like winners. The next game can’t come quicker and like the Celtic fans are singing; “I just can’t get enough.”