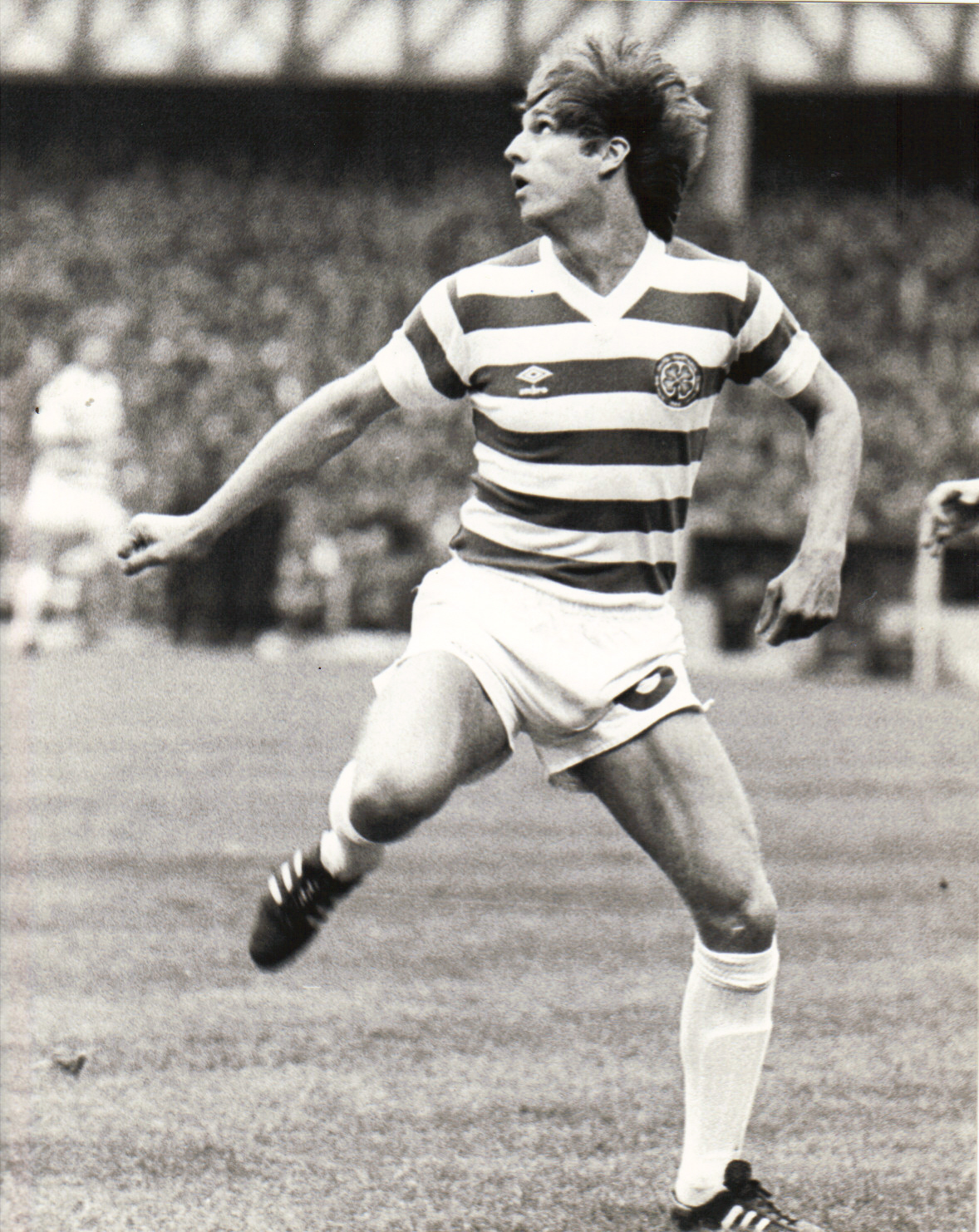 Tom McAdam was one of Jock Stein’s last Celtic signings and, despite having a decent scoring record as a striker, he had lost his position in the attack by May 1979. Celtic then suffered a defensive injury crisis and the then manager, Billy McNeill, pitched Tom into the side as an emergency centre half for the last four games of the 1978-79 season. Celtic needed to win all four to win the league title and did so, culminating in the legendary 4-2 win against Rangers at Celtic Park when ‘Ten men won the league.’ Despite the magnitude of the win many people wondered whether Tom would actually retain his place in defence or revert to the forward line.

Tom eventually settled down in defence for the rest of his career at Celtic. In the 1979-80 season he made a great impression by playing as a sweeper behind Roddy MacDonald although he was to suffer huge disappointment when he missed the 1980 Scottish Cup final ‘riot’ match through suspension. McAdam was a good header of the ball, had terrific timing in the air and  had a cool head for playing in defence. He was also very mobile for a defender and having been a decent striker he was now the ‘poacher turned game-keeper’ so was able to read the game well from his defensive beat.

From 1980-1983 Celtic had one of the finest attacking teams in their history. Players like Provan, Nicholas, Burns, McGarvey and MacLeod were at the peak of their careers and gave the Celts a different dimension with their style and flair. The team enjoyed a good amount of domestic success but real progress in European competition sadly eluded them. The Celtic defence took a bit of flack during these times and this was largely unfair as the back line was often left exposed due to the team’s attacking formation. There was no such thing as a holding midfielder in McNeill’s sides and the tactically sharper opponents in European competition often took advantage of Celtic’s open style of play.

There were a lot of changes around Parkhead in the mid 1980’s with Mo Johnston, Brian McClair and Alan McInally being the new boys on the block as Celtic’s personnel changed although Tom remained a constant in the team with his steady, reliable displays at centre half. He is fondly remembered by the Celtic fans for his excellent record of scoring against Rangers in the big Glasgow derby games. In 1980, Tom’s brother, Colin, signed for Rangers from Partick Thistle and there was the unlikely sight of the two brothers going head to head in the heat of the big derby matches. Happily for Tom, he was the more successful of the two in those games during that period.

In his time at Parkhead Tom saw off a number of rivals to keep his place in the team. Roddy MacDonald, Willie Garner, Davie Moyes and Pierce O’Leary were all unable to move Tom from his regular central defensive berth alongside Roy Aitken.

In 1985 Celtic reached the Scottish Cup final against Dundee United. Tom had been tremendously unlucky to miss the 1980 and 1984 finals and was said to be desperate for a winners medal to compete the Scottish domestic set of honours. Things looked bleak late in the game with United leading 1-0 and time fast running out. Davie Provan equalised with a brilliant free kick and there is a great picture of a delighted Tom swinging spectacularly on the crossbar after Provan’s goal. Frank McGarvey scored the winner and the defence then earned their medals with some stout defending before end with Tom organising the back line after Roy Aitken had been effectively pushed into midfield. Celtic prevailed and he gave one of his finest performances in the hoops.

Tom McAdam joined Motherwell in 1986 but left the Celtic supporters with a host of good memories. He was a dependable defender during his time at Celtic, content to keep a low profile and will always be remembered with tremendous affection for his happy knack of scoring vital goals against Rangers.