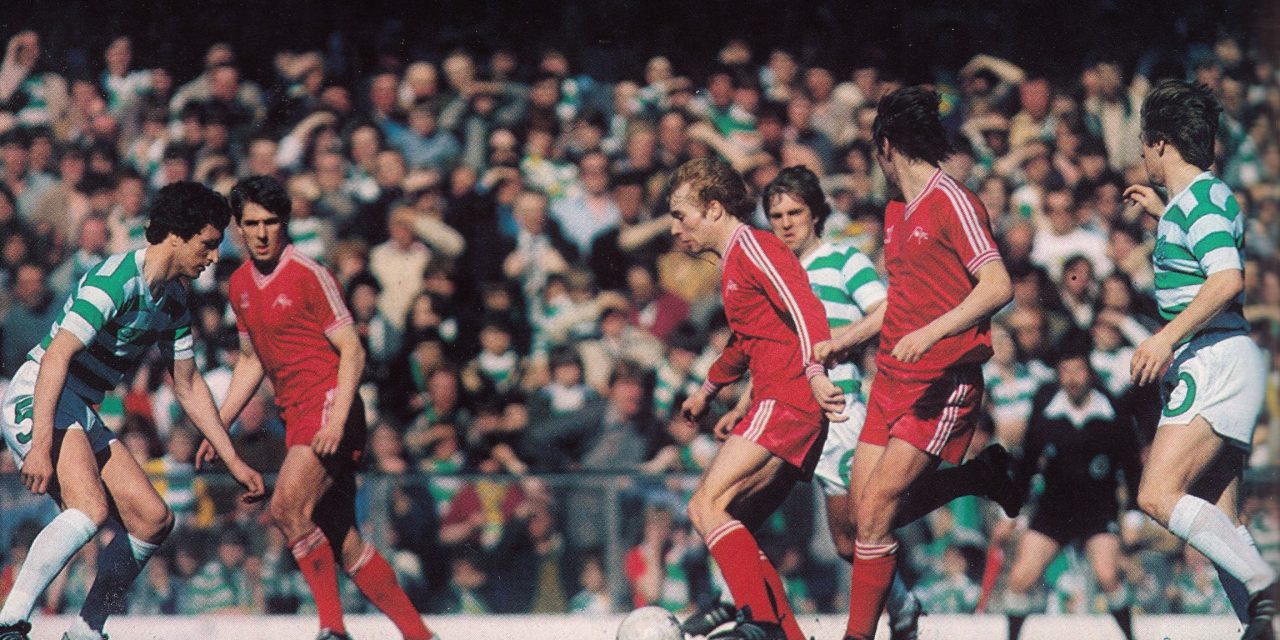 On April 2 1980 Celtic met Rangers on a pleasant early spring night at Parkhead. Celtic were favourites as they were top of the league by some distance and hadn’t lost a league game since December 1 1979 when they had gone down by 2-1 to St Mirren at Love Street. There was huge interest surrounding this game as both clubs had broken the Scottish transfer record in recent weeks. In February Rangers signed Dundee’s Ian Redford for a record £210,000 before Celtic responded in mid-March by bringing Scottish international striker, Frank McGarvey, back to Scotland from Liverpool for £250,000 and thereby smashing Rangers’ Scottish record fee which had lasted only a few weeks.

It was a pulsating encounter, a typical ‘blood and snotters’ Glasgow derby game, which was decided by one piece of determined play with only minutes left. Roy Aitken chased a lost cause to the bye line and, keeping the ball alive, he swung over a cross for McGarvey to rise beautifully and send a header low into the Rangers’ net. Parkhead exploded that night and almost every observer throughout the country thought the league race was over with Celtic having a seemingly insurmountable lead.

Two days later, a huge crowd gathered inside Celtic Park on a warm afternoon to watch Celtic play Aberdeen. The Dons, under fiery young manager, Alex Ferguson, were making a name for themselves with some great performances and a number of fine players who were establishing quite a reputation within the Scottish game – Willie Miller, Gordon Strachan, Steve Archibald, Alex McLeish and Mark McGhee. Celtic were to endure a most frustrating day. Aberdeen opened the scoring before John Doyle equalised. Centre back, Tom McAdam, then had to go off with concussion after a serious clash with Mark McGhee, and when Roy Aitken moved back into defence to replace McAdam, Celtic lost a lot of impetus. In 68 minutes, with Aberdeen leading 2-1, Celtic were awarded a penalty. Veteran forward Bobby Lennox stepped up, only to send a tame effort into the hands of Bobby Clark. That was Celtic’s last chance to breach the Dons defence and it finished 2-1 for the reds. Celtic’s lead was now cut to 5 points with Aberdeen having a game in hand. Not quite the time for panic yet, we all thought.

Panic began to set in on April 8 when Celtic went to Tannadice. The game was goalless and even at half time but in the second half United hit top form to run out convincing 3-0 winners. There was now criticism of McGarvey, the expensive striker who was brought to add the gloss on the season, yet who now looked unfit and short of confidence. The Celts travelled north again to Dundee on April 19. On a bright sunny day the Dens Park pitch was dry and fiery and a strong wind made conditions difficult. Things looked fine when Aitken gave Celtic an early lead but Celtic supporters looked on in horror as Dundee scored 5 goals, scoring with virtually every attack they mustered in the entire game. A missed Murdo Macleod penalty had just about topped off an awful afternoon.

With Aberdeen continuing to play well and win, the title decider was set for Parkhead on the evening of April 23 when the Dons returned to visit Celtic for the second time that month. Billy McNeill, now clearly concerned, made sweeping changes to his team. McGarvey was dropped for the veteran Lennox, an out of form Alan Sneddon was left out with Danny McGrain reverting to right back, and combative midfielder Murdo MacLeod filling in at left back. Mike Conroy was then brought in to add some steel to the Celtic midfield. If Aberdeen had been fortuitous in early April to beat Celtic first time around then they were not in need of luck this time. Gordon Strachan was unplayable on the night with Dons winning 3-1. It had been a mixed night for Celtic keeper, Peter Latchford. He had saved a penalty at 1-1 but with Aberdeen leading 2-1 and the game in the balance, he had blundered by dropping a cross at Strachan’s feet for the crucial third goal. Everyone in the ground knew that was the end at that very moment.

The league table did not make the good reading it had done after Celtic had defeated Rangers only three short weeks previously. It was still very close to call but the Dons now had a slight advantage and were clearly the team in form.

Celtic won their next two games in far from convincing fashion. They beat Dundee at Dens 2-0 and Partick at Parkhead 2-1. This led to them visiting Love Street on the last game of the season, on May 3, having to win to keep any title hopes alive. The game finished 0-0 with a highly controversial incident when Tommy Burns was brought down in the area with the referee pointing to the spot before changing his mind and awarding a free kick at the very edge of the penalty area. At Easter Road, Aberdeen resoundingly beat relegated Hibs 5-0 to win their first league championship since 1955. Their fans danced over the Easter Road pitch with delight. The Dons had won the league title and they still had one fixture to play. At Love Street, the huge Celtic support left the stadium in muted silence.

The capitulation in the spring of 1980 was a very painful experience for Celtic supporters and left a scar which was take time to heal. It was difficult to comprehend that a team with a seven point lead with just 8 games to play could have wasted such a considerable advantage in such a short period of time. There was the consolation of beating Rangers in the Scottish Cup final later that month and, most welcome as it was, it did not entirely make amends for blowing such a lead.

Thankfully, there were a number of promising youngsters in the Celtic reserve team who were ready to make the breakthrough to first team level. Pat Bonner, Mark Reid, and a certain Charlie Nicholas, who was gaining great reviews with his goal scoring exploits in the second string. The next season was to belong to him. But that’s another story for another time. 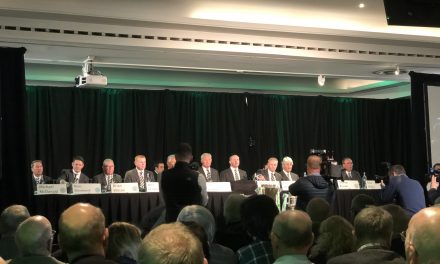 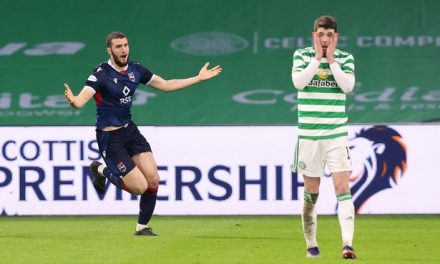