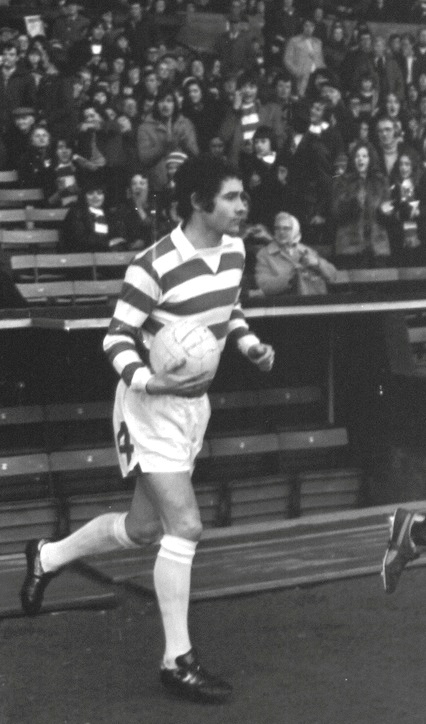 At the very end of the 1972-73 season Jock Stein surprised Scottish football by signing Steve Murray from Aberdeen. The £50,000 purchase may not seem a huge investment in the modern age but in 1973 this was a significant sum for Celtic to lay out.

Murray, a mobile and skilful midfielder, was a Scottish internationalist who was coveted by many clubs in England and it was seen as major a coup for Stein in getting him. Steve would have regarded himself as fortunate to be considered for his debut in such a glamorous setting as  Jack Charlton’s testimonial, when Celtic travelled to Elland Road to pay tribute to England’s World Cup winning centre half.

Charlton was one of the most respected players in British football and he was set to play his last game for Leeds before taking over as Middlesbrough manager and it was sure to be an emotional night for him. Celtic now had the proud boast of having the privilege of playing benefit games for three English World Cup winners – Bobby Moore, Bobby Charlton and now, Jack.

4,000 Celtic fans travelled down to cheer on their heroes, many of them still having vivid memories of Celtic’s epic European Cup semi final victories against Leeds in 1970. They were rewarded with a game worthy of such a special occasion with such players as Billy Bremner, Peter Lorimer, Allan Clarke, Kenny Dalglish, Jimmy Johnstone and George Connelly on show.

Before the game certain formalities were observed when Celtic chairman, Desmond White presented a silver salver to Charlton and the teams stood to attention as the national anthem was played as the Leeds’ president, The Earl of Harewood, was in attendance. It was reported that the only blot on the night was the Celtic fans jeering throughout the course of the anthem.

Celtic, with Steve Murray, to the fore, took the lead when Kenny Dalglish headed home a cross from Tommy Callaghan. Leeds equalised before half time when Allan Clarke scored from a suspiciously looking offside position.

After the break Leeds brought on the relatively unknown striker Joe Jordan, to allow him to play against his boyhood heroes. The Celts took the lead again when Bobby Lennox turned Gordon McQueen inside out before firing home a low shot before Clarke again levelled the score with a terrific finish.

The 35,000 crowd were in raptures as both teams turned on the style and two famous red heads then took turns in scoring, Johnstone for Celtic after Dalglish set him up, and Bremner for Leeds with a powerful shot.

A draw may have been a fair result but Celtic’s pride ensured the dug deep into their reserves of energy to conjure a winner,  with only minutes remaining, when Jimmy Johnstone sprinted clear from the half way line and slipped the ball past Gary Sprake in the Leeds goal.

At the end there was much celebration. Charlton, draped in Celtic scarves, took the adulation of the fans and confessed that he had cried for the first time since Munich, a reference to his brother Bobby being on the fateful Manchester United plane crash in 1958.

There was also a mutual appreciation between the supporters as both sets of fans  chanted the other’s name in recognition of the quality of football they had witnessed and the Celtic players then went on a lap of honour to take the acclaim of the crowd.

Much jersey swapping had gone on and as the Celtic players took their bow, they did so in Leeds’ yellow jerseys but one player looked conspicuous in still wearing his Celtic hooped shirt – Steve Murray. Afterwards Steve was at pains to point out that this was no slight against Leeds but that he had waited so long to wear a Celtic jersey he only wanted to keep it as a souvenir of the occasion.

This was a fantastic spectacle and few Celtic players can boast a more memorable Celtic debut than Steve Murray.