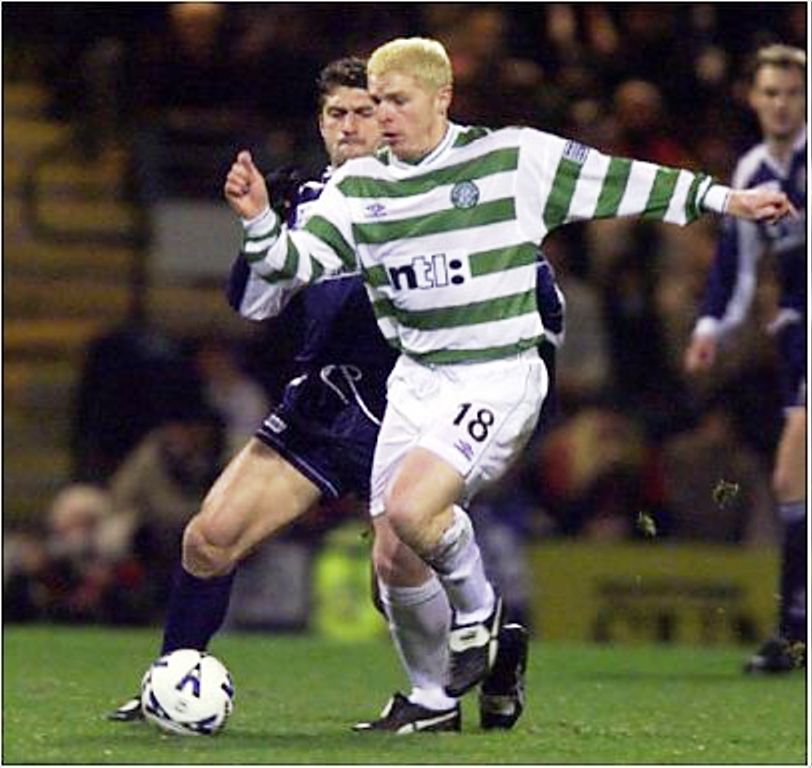 When Martin O’Neill became Celtic manager in the summer of 2000 he made Neil Lennon a priority transfer target to be obtained from his previous club, Leicester City.

O’Neill had built an excellent team at Leicester and the cornerstone had been the midfield quartet of Lennon, Garry Parker, Robbie Savage and Muzzy Izzet. Celtic’s early contact with Leicester regarding obtaining Lennon’s services was not encouraged and Celtic were rebuffed on several occasions despite offering big money.

Things were to change in early December. Leicester’s form after O’Neill left had been poor and they were rooted at the bottom of the table with relegation fast looming. Lennon’s persistence in attempting to manufacture a move to Glasgow eventually paid off with Celtic paying a huge fee of £5.75M. Celtic, after a great start to the season, had recently lost 5-1 to Rangers at Ibrox and O’Neill was delighted to obtain Lennon’s talents to bolster his midfield.

Lurgan born Neil had been a lifelong Celtic fan and he made no attempt to hide his joy in the Scottish media at joining his hooped favourites. This was still no excuse for the reaction of the Dundee fans, who actually booed Lennon throughout the warm up, even before he had kicked a ball for Celtic. Sadly, this was a routine that was to be endured in grounds throughout Scotland during Neil’s period at Celtic Park.

Some football experts had expressed their doubts that Lennon could play in the same midfield as Paul Lambert as it was felt that both players’ styles were too similar to each other. However, this game was to prove that the two Celts were compatible and they made quite a midfield barrier in front of the defence and they also allowed the likes of Stilian Petrov, Lubo Moravcik and Alan Thompson to express their more creative talents.

On a cold day at Dens Park, Celtic warmed the hearts of their supporters by taking a first half lead with a tremendous goal. Moravcik made it to the bye-line and cleverly cut the ball back for the young Petrov to score with a superb side footed goal. After this Celtic were pinned back as Dundee made great endeavours to equalise.

The Dens side were under the leadership of Italian manager, Ivano Bonetti, and he had put together a fine team with some special talents in Claudio Caniggia, Giorgi Nemsadze, Juan Sara and Fabian Caballero. It was no surprise when they equalised just after half time when Caniggia’s cross was spectacularly headed into his own net by the unfortunate Celtic captain, Tom Boyd. Some observers humorously observed afterwards that Boyd had actually scored the goal of the match !

Celtic were under pressure for a period but this new side had backbone and resilience which was only to be expected with such characters as Henrik Larsson,  Johan Mjallby and Chris Sutton in it. In an effort to win the points O’Neill replaced Bobby Petta with Jackie McNamara and went to a 4-4-2 system which helped Celtic to press Dundee back.

Time was fast running out as Celtic forced a corner on the left hand side. Petrov swung over a cross which the Dundee defence struggled to clear and the ball fortuitously broke to Didier Agathe, a yard from goal, who gleefully knocked the ball in for the winning goal.

The celebrations were joyous both on and off the pitch as Celtic players and fans showed their delight. Everyone knew that it was results like these that win league titles and it was also a thought that this excellent Dundee side would take points from Celtic’s league rivals, which eventually turned out to be the case.

Neil Lennon was off and running and there was to be no stopping him, or Celtic, in this most memorable of seasons.

The Celtic Underground – Slaying The Zombies