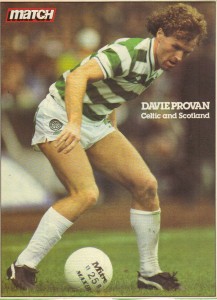 This week St Anthony is joined by another star of the hoops from the late 70’s and early 80’s, Davie Provan. For the 40 somethings and upwards Davie was an excellent winger who (along with Murdo McLeod) was able to fire in the odd spectacular free kick the most famous of which gets a wee airing on this podcast.

Davie was perhaps unforunate to come up against John Robertson and Davie Cooper otherwise he may have won more caps for Scotland and his career was cut short by ME, an illness which some 30 years later is still not that well understood. His impact on the team and the way the fans thought of him perhaps reflected in circa 42,000 turning up for his testimonial on a cold November night in 1987 (these were the days when a big crowd was 35,000 against Hibs or Aberdeen). For younger fans Davie is a media pundit.

The first song is from the chart when he signed, the last when he scored THAT free kick.

CU Podcast: Voices from the Underground 11