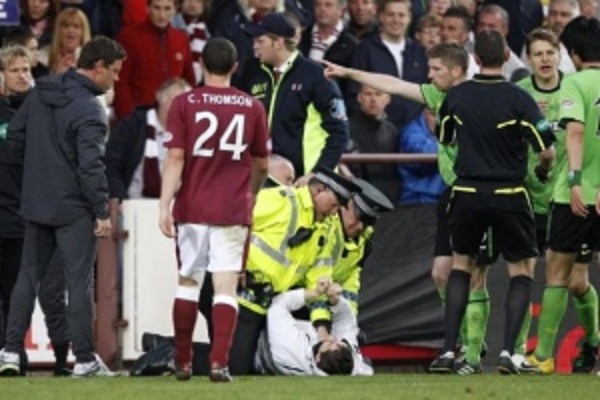 The war for the hearts and minds of public opinion is nearing end game. The last vestiges of the old guard are fighting tooth and nail for their status quo. Some cannot countenance equality, others see too much money in bigotry. History shows it usually takes a major incident to signal the end of an era of hatred. It needs a shocking event to shame the silent majority into action. I feared it would take a stomach churning tragedy to put us to where we are this week, where our media have given our sickness it’s proper name and where the sickness has been laid bare to the whole globe. Fortunately it seems to have taken the actions of one bampot hurdling a barrier in Edinburgh rather than anything lethal.

The scenes beamed around the world from Tynecastle would sicken any right minded individual. However there are other scenes from that night that can and will be used to return this sickness back to the “they are as bad as each other” zone that the bigots want to keep this situation. Those scenes are the videos of stewards and Police being assaulted within the stadium and the video’s of the full provisional wing IRA songbook being belted out.

More than one person whilst at their place of work on Wednesday night was blindsided by a ned, then assaulted, before the ned was dragged off. This also happened to a Hearts steward in scenes this writer found deplorable. Even under the extreme circumstances that prevailed on Wednesday there is no place in a civilised society for the scenes witnessed in the away end at Tynecastle. I have heard the argument forwarded that credit should be given to the restraint of the support that there was not a riot on Wednesday. I find it hard to offer credit to people for meeting the most basic standards of behaviour expected of people within a civilised society.

We have gloated whilst our cousins on the south side have rampaged across Europe shaming our nation. We have chuckled at their miserable, mealy mouthed excuses attempting to mitigate their behaviour. On Wednesday sections of our support were just as bad. We, as a support, set our standards of behaviour a long time ago. We set very very high standards and we invariably meet them. Some would wish Wednesday to be expunged from the record on this basis. I am of the opinion excusing it once opens the door to excusing it twice. Once that happens who knows what it will take to close the door again. Celtic are a family. It is natural to not want to believe they are capable of what happened. It is a natural reaction to try and make excuses for your loved ones when they make mistakes.  This however is not always the healthiest or best course of action. When the standards have been set they must be maintained, particularly at this perilous moment.

Those songs. Those thuggish scenes allow the bigots to reframe the argument back to where they want it. They want the victims to look as bad as the aggressors. It vindicates the aggressors behaviours. You know what side will win this battle? The side that controls their morons. By posting bombs and bullets their morons have swung the battle in our favour. A handful of halfwits have almost lost the whole war. The scenes at Tynecastle prove we have morons capable of exactly the same madness.

For me this war is being fought over football however it is not about football. For me it isn’t about getting society at large to say “Rangers are bigger bigots”, for some sadly that seems to be the case. For me this is about removing hatred in all of it’s forms. Us, right here, right now have the chance to end this war. Society at large have denounced all other forms of hatred. They are ready to denounce hating us. Let’s not make it harder for them to get where they need to be.

When people go to away grounds they are representing our side. Our side in a war our children and grandchildren demand we win. So if we can get our morons to knock the singing on the head until the war is won then we can explain to a populace willing to listen the difference between political songs of somebody’s heritage and songs of hate. The ones who spoonfeed the masses their opinions daily are quite happy on the distinction Joe McPublic makes on that at the moment, any stubborness on this issue damages the cause. Stubborness will not change anything. Sometimes you have to concede ground in one area to achieve the upper hand overall. The singing of these songs are stoking the hatred of the bigots. This hatred is having a direct consequence now for high profile supporters of our club and for the most important employee of the club.

I do not want to see the good work put in ridding this society of poison delayed, or totally undone, by cretins shaming the colours they wear proudly on their back and handing the initiative back to bigots who want to perpetuate hatred in our country.

I will leave you with something else from Malcolm X – “In all our deeds, the proper value and respect for time determines success or failure.”

It has been a long road, impossibly long. The end is within our grasp but we have not reached the destination yet. We require patience in the face of the final attacks of a cornered, wounded beast. This is the most dangerous time. We have collective responsibility. Make the right choice.

Support Celtic. Support Neil. Sing about nothing else.