Time for the good, the bad, & the ugly from Saturday’s Celtic vs Rangers game. Non-penalty xG was 0.14 vs 1.26. To address one of the hot topics coming out of the game, the first graphic shows other games since the beginning of the 2015-2016 season with low number of shots on target. Only the 2-0 defeat to M’gladbach in the Champions League in 2016 saw Celtic with zero shots on target.

A reminder that event-based xG models are just one of many analytical tools. For example, Wyscout’s model assigned an extremely low probability to Moi’s chance, while Instat’s xG model had the game at 0.33 vs 1.34, with disparity in the Celtic xG due largely to assigning a higher probability to the Moi chance.

As has generally been the case this season, we lacked attacking output from midfield and the two “strikers.” The common narrative that Rangers did not need to “get out of second gear” is largely supported by the underlying statistics. Once the first goal was scored, Rangers disciplined system allowed them to control the game with neither side creating a significant amount of chances. For some context, in the 7 derbies against Gerrard prior to Saturday’s, Celtic had averaged 1.15 xG and Rangers 1.11, which indicates the main difference in the game was Celtic’s impotence in attack.

A caveat for this game – the team performance was so poor that the “goods” are on a relative scale rather than a declaration of any excellence. First good goes to Stephen Welsh, who was thrown into an extremely difficult situation and did himself and the club proud, IMO. He won 5 of 6 defensive duels, 11 of 17 overall duels, 4 of 6 aerial duels, and had 11 interceptions. He did turn the ball over 12 times, but I will address that general issue in next section. The other good and my MOTM goes to Scott Brown. He won 7 of 9 defensive duels, 21 of 32 overall duels, 5 of 6 aerial, with 9 interceptions and 19 ball recoveries. He did turn possession over 10 times. For the job he was asked to do, it was probably close to the best he could have produced breaking up play and mopping up.

Bad goes to the same structural issues I have been referencing for months. As good as Brown was mopping up, this screenshot is just one example of a structural problem. 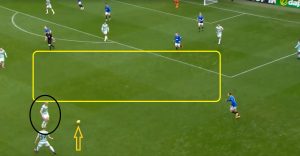 Brown intercepted a Barisic clearance with decent body positioning and space to create in a dangerous area. A Rangers player is a few yards behind him to the inside and oncoming. This could have been a big chance with a more attack-minded player. Brown collected the ball, turned backwards and recycled possession, allowing Rangers to regain shape. Brown’s involvement in buildup has been muted in every derby since Celtic’s 1-0 victory in Gerrard’s first, and he was again limited to just 26 passes received. The move to a flat 3 in midfield has helped reduce some of the issues in defensive transitions the team was surrendering in 4-2-3-1, but playing a flat 3 with the central player lacking in creative and attacking skills remains a major issue.

As the first graphic above shows, Celtic having issues creating chances vs Gerrard/Beale’s Rangers is not new. I have taken a lot of heat and abuse since the end of last season for having the temerity to suggest they have been better managed and coached. I keep saying the same thing- as a one-off Saturday was not a disaster, but underlying problems remain unaddressed. Like a broken record, I said the same after Kilmarnock, Dundee, Ferencvaros, St. Mirren, Livingston, Riga, Sarajevo and St. Johnstone games.

Like after Ferencvaros, I am not going to criticize individual players. When nearly every player turns the ball over at a high rate, I look at the system and coaching. Duffy is not a ball playing CB yet is being asked to do so- not his fault. He lost possession over 17 times. Laxalt was thrown in with teammates he had not played, with no common language, and in a game plan the manager admitted had been thrown together just a day prior- not his fault. He won just 8 of 28 duels and lost possession over 23 times. As I feared, Celtic’s growing reliance on Frimpong was addressed by a competent opponent. The disparity in management and coaching quality was on full display for all to see. I take no satisfaction from making such a declaration. I think many more in our support are finally coming to grips with the extent of the issues.

One of the last bastions of rationalization seems to be the hope Rangers will drop more points in non-derby games over the duration of the season. While anything is possible, they have made changes to address that risk with the same systematic approach they have deployed generally. They addressed the depth issues and the over reliance on Morelos which were the major drivers of the post-Dubai drop-off in their results last season. Their bench Saturday included Aribo, Jack, Hagi, and Itten, with Roofe and Zungu still to return/arrive. Say what you want about the quality of those players relative to ours, but they are dramatically better than the likes of Halliday and similar players who comprised their depth the last couple of seasons.

As for style of play, the shift to a 4-2-3-1 and a more dynamic and motion-centric attack versus packed defenses has been relatively successful for Rangers so far this season. Their xG differential through the first round of league fixtures was almost 2 per game, which is a level of performance similar to what Celtic posted during the best periods of last season.

Ugly goes to yet another vital decision point. The first was in preparation for CL qualification and building a European level side with a coherent plan. I argued this was vital to the season and the risks a failure could unleash were so high, with structural issues so fundamental and obvious, that Lennon’s poor decisions plus the Ferencvaros debacle warranted a change at manager.

A 2nd decision point occurred as the transfer window closed, and many were then thrilled we kept all our players. In contrast, I grew concerned about the risks of forcing players who want to leave to stay and play for a manager for whom they could possibly have developed a deaf ear and/or in which have lost confidence. This all occurred while draining cash reserves in the midst of a pandemic and deviating from the club’s business plan to sell young players at a profit after a couple of seasons of development.

Saturday was not a disaster within the context of a 38 game marathon, and there still remains ample time to alter course. However, the league is now down to a virtual coin flip in various predictive models. My call to sack Lennon after Ferencvaros was following an extensive analytical case built over months, and because I had seen enough to be convinced that he was unlikely to alter course. Now I fear a change may also be required to re-energize key players. But there may be no silver bullet with how far this has progressed. Rangers are not likely to go away and the status quo is unacceptable. 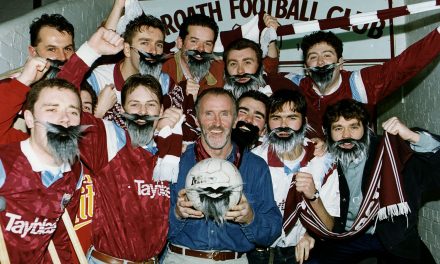 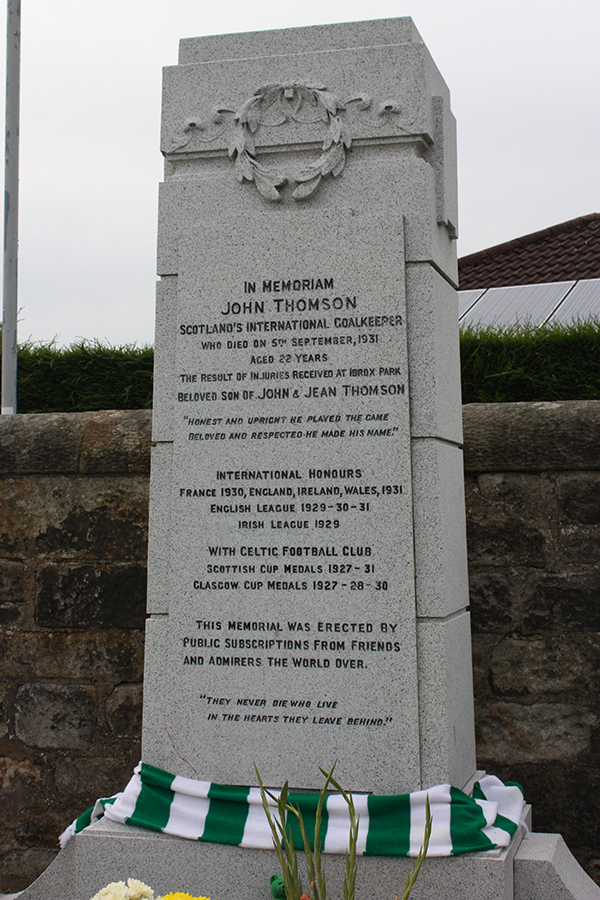 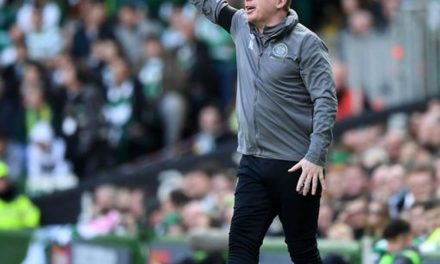