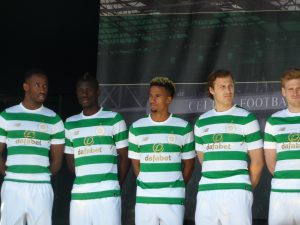 Earlier this week, we were fortunate enough to get an invite along to the new Celtic kit launch. It was very well done. The Sun was shining, many schools were off with the local elections and a crowd of circa 3,000 were on the Celtic Way celebrating the launch of a new strip commemorating the Lisbon win of 50 years ago. As I sat there, topping up my tan (actually just a red face, I don’t tan) I sniggered and marvelled in equal measure.

The marvel was that Celtic had managed to make a new strip into a must see event. This feel good factor continued from the 15,000 present almost 12 months ago at the Brendan unveiling and again re-enforced my thoughts that Celtic laden with the riches and marketing provided to EPL clubs would easily be a top 4 side inside a couple of years. If we can have such events in the parochial cash strapped SPFL, what could we achieve in that over-hyped environment. It also made me realise that the New Rangers board contribute to their own Espanyolification. I don’t profess to know the ins and outs of their commercial dispute with Mike Ashley over the strips, I just know that they make little if any money. Sometimes, however, marketing is not about the money.

Their refusal to co-operate with their jersey supplier means that whilst our launch is broadcast across Facebook and Sky they cannot have such an event. Whilst this summer you will see our strip in holiday resorts across the globe you will see theirs nowhere. They will have no visible presence. To the non-Rangers fan they will be anonymous. Even in the worst cesspits of Scottish society during the Orange Fest season there will be no new strips on display with only well worn and ill fitting strips from the bygone era of old Rangers to be seen. Like never before these marches will look like a tribute to a culture of centuries past.

Sitting in the sun Thursday I marvelled at the rapid pace of Glasgow’s Espanyolification.

And the laugh? Well in front of us were some of our finest sports journalists. Good guys and diddies and as I listened to Lustig, Gordon and pals trying to make chat about a new football strip sound like a serious and worthy topic of conversation for grown ups I couldn’t help think about those members of the media in front who would have spent their childhood buying a blue jersey. How crap must it feel. Whilst their tribute club wallows in the mire they have sit through this Celtic love-in.

CU Podcast: Voices from the Underground 5