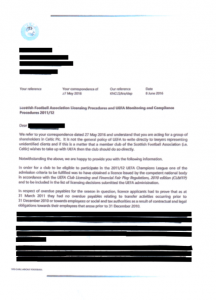 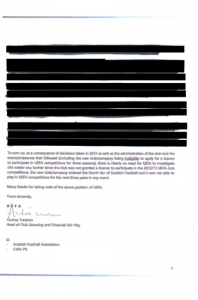 In 2012 Rangers went bust.  Out of business.  LIQUIDATED!  This is a fact.  There was no holding company, no incubator, no nothing.  The football club had racked up debts, cheated the taxman, spent money it didn’t have and ran out of options.  It entered administration and never came out.  It lurched to liquidation and died but since then the lexicon of liquidation has resulted in all sorts of garbage to pretend the above didn’t happen – NONSENSE!

One way that Rangers had attempted to struggle on and survive in 2011 was to hope that money from European football would be sufficient to take them to the next round of season book sales but they failed to qualify.  This didn’t stop them from breaking the rules and delaying publication of accounts by 12 hours to facilitate this.  The question for many was how did they manage to get and retain a UEFA license?  Was their rule breaking and license granting incompetence from the SFA or something worse?  That was the crux of the issue for the Resolution 12 requistitioners at the Celtic AGM in 2013 and since then they have been seeking to find out.

The work of the requistitioners in seeking an answer on the governance issues continues and is beyond the remit of this article, but in the course of their enquiries they received unsolicited confirmation from UEFA of what any lawyer or accountant will tell you – a liquidated business is a dead business.  UEFA confirmed Rangers died!

The letter is included with this piece.  I have removed some of the body of the text so as not to impact on the ongoing queries regarding SFA governance and their role in the issuance of the Rangers UEFA license and responses to enquiries in public or private since when questioned but I have left in the start and end to provide confirmation of the letter’s authenticity.  I also leave in the key comments where UEFA are highlighting the challenge of putting forward any punishment because the “Club/company” died.

Company law is company law. You cannot change it because you don’t like it.  Likewise, (as we have seen this week) UEFA rules and decisions are what they are whether we like them or not.  I will therefore end with UEFA’s own words for you to use next time you hear a Rangers (new) or media person struggle with the lexicon of liquidation;

“the new club/company entered the fourth tier of Scottish football…”