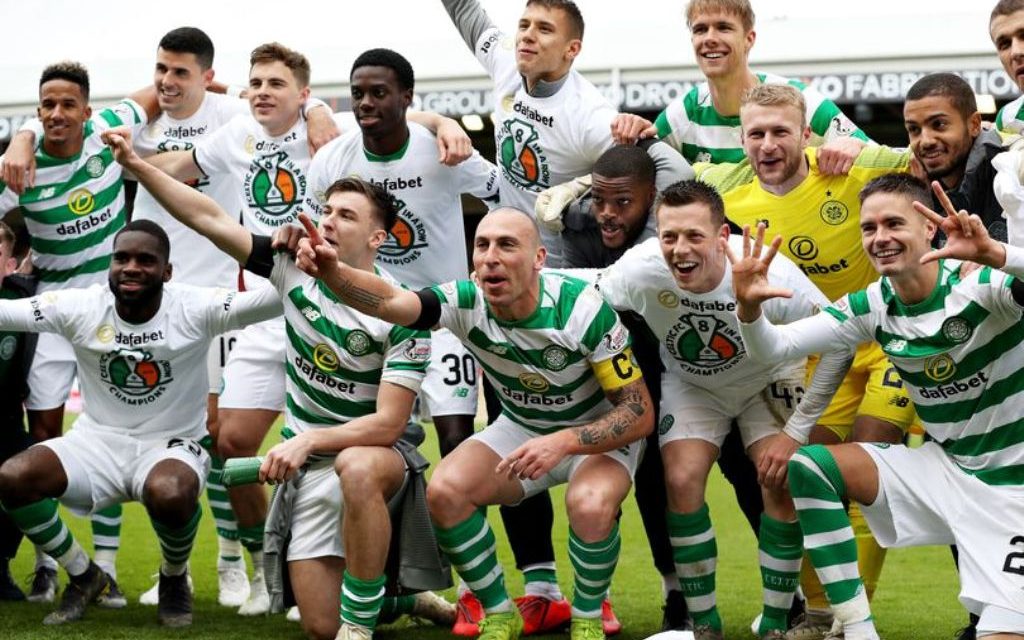 As the old adage goes, the League race is not a sprint, it is a marathon. For 38 weeks there are bound to be ups, downs and indifferent results along the way. However, league tables don’t lie. A lucky team can win a cup but the best side always wins the title in the end. Celtic are now 8-in-a-row champions and it’s no fluke. Here is the 10 main reasons that led to the Celts being league winners once again.

During the course of the season Celtic were dealt a number of devastating blows. As far back as August there were rumours about Brendan Rodgers future. This had an unsettling effect on everyone at the club which inadvertently created the Boyata affair which led to the defender allegedly refusing to play in the ill fated ties against AEK Athens. Moussa Dembele’s late departure at the end of the transfer window then meant that no suitable replacement could be found in time and when Leigh Griffiths’ personal traumas were made public it was another issue that Celtic had to deal with that they could well have done without.  On a personal level. I have never witnessed such a bad season for injuries. It was almost like a curse and it seemed that every single game Celtic experienced, not only an injury, but a serious one which would keep players out of action for weeks on end. It’s hard to think of a Celtic player who didn’t have an injury at some point. Possibly the biggest issue in the season was Rodgers’ sudden defection to Leicester. Sure, there had been rumours and his leaving at the end of the season was thought to be expected.  But to leave at such a critical stage, with the league and cup very much to play for, was the ultimate act of betrayal. All things considered, it was  a tremendous achievement to retain the title with all these adverse goings on happening all around us.

On the day Celtic won the league at Pittodrie, their home league record showed 16 wins with 2 draws and no defeats. Their goal difference was 53 scored and 6 conceded. That is absolutely outstanding form in any league, in any country, at any level. Parkhead truly was a fortress and thank God for that as the away league form was mediocre and is something that must be addressed for next season.

The main player of the year awards have not been announced yet (at time of writing) but any impartial observer will surely proclaim that Callum McGregor was the most influential player in the SPFL last season. Callum was always a talented boy but has blossomed this season to become Celtic’s main playmaker. His long and short passing is delightful and he has added a wee bit of aggression after having built himself up a bit. Always likely for a goal, it is refreshing to see him shooting in a team which often try and walk the ball into the net. Whether Callum wins any personal awards is irrelevant. He has picked up the two real awards so far and hopefully will add another in the cup final against Hearts. There is no doubt that Callum McGregor was Celtic’s best player during the course of the season and the hope is that there is more to come from him in the seasons ahead.

It may not have seemed like it each week when Celtic defenders and goalkeepers had our hearts in our mouths with playing the ball in and around their own penalty area to give us palpitations, but the facts show that the Celtic defensive record was the rock upon which this league success was built. Losing just 17 goals in 36 games is an exceptional record. It seems likely that Rangers will have outscored us this season (another matter that has to be addressed next season) so there has been great reliance on the defence this season. A big mention must go to Scott Bain and Kristofer Ajer, in particular, for their tremendous contributions after the new year in the run in.

To all intents and purposes, Ryan Christie could easily have left Celtic last summer without anyone being overly concerned. With Stuart Armstrong departing in the close season it was felt that Ryan may get a run in the team but that was not to happen immediately. It was only in October that Ryan eventually made the breakthrough, in the Hearts semi at Murrayfield, and he didn’t look back. 11 goals from midfield was a great contribution and he looked to be Celtic’s main scoring threat from midfield throughout the campaign. Another thing worth pointing out is that Ryan is a gutsy wee guy who took several severe injuries for the cause during the campaign. It is hoped he will recover from the pains he suffered from that appalling challenge in the semi final against Aberdeen.

Think back to December and how low we all felt after that defeat at Ibrox. For the first time in many years, the pressure was really on, and it was obvious that whoever performed best after the winter break would prevail in the title race. Happily for us, Celtic went out and won 13 and drew 3 in an unbeaten 16 run game which brought them the title at Pittodrie. This was the mark of true champions that they responded in this fashion. Whilst others were all talk, the Celts were all action.

Late winners during football matches are not lucky. They are a sign of a team’s desire to win the game and the number of late winning goals this season is testament to the old Celtic spirit of playing until the death. The late winners at Rugby Park and Tynecastle were most memorable and a mark of the determination of the Celtic players. Those two games knocked the heart out of Rangers’ challenge and James Forrest’s late winner against Rangers at Parkhead in March was the icing on the cake.

One of the most pleasing aspect about Celtic these last few seasons has been the blossoming of James Forrest into an essential player in the team. James has scored 17 goals this season, a truly outstanding contribution from a guy who is still essentially a wide player. He now has more licence to roam these days and that is reflected in his increased scoring tally. The four goal haul against St Johnstone in October was a notable feat and he also featured in scoring a number of important goals at critical times.

Cast your mind back again to the Ibrox defeat in December. Injuries had taken their toll so much that Callum McGregor was fielded at left back and young Mikey Johnston was required to play as lone striker. Celtic were down to the bare bones of the squad. New recruits were essential and came in the shape of Jeremy Toljan, Timo Weah and Oliver Burke. None of them have been particularly outstanding on an individual basis but their collective arrival gave the club a boost when it was needed, particularly during the crucial gamed during February and March. They were fresh legs and gave the fans a lift at a time when it was needed. Their contributions were small but very significant all the same.

When Rodgers legged it to the mighty Leicester, Celtic wasted no time in calling upon Neil Lennon’s services, at least for the short term. And they were lucky to have him. Here was a guy who knew Celtic inside out and who could command the respect of the players. The record books show that Neil led Celtic on an unbeaten run to the league title. It does have to be said that there was criticism over certain performances along the way but, in turn, it was difficult for him to take over another manager’s (hugely successful) team and the pressure that went with it. Anything other than a league win would have been an unmitigated disaster. However, Neil Lennon deserves great credit for steadying the good ship Celtic and steering her through difficult waters. Whether or not Neil is given the job on a permanent basis he will always have another notch on his belt, another league title to boast of, and for that he will always have our thanks.