Naturally as a Celtic fan you were desperate to get as many Celtic
players as possible and in those days in a Catholic school these cards
were at a premium as we were all Celtic fans to a man. You were best
getting hold of your pals in a non denominational (Proddy) school as
they were Rangers fans in the main and would gladly swap any Celtic
cards for their Royal blue heroes in a win-win situation. One Jimmy
Johnstone could easily command five of any other team.

Another way of gaining cards involved two boys throwing them against a
wall and the one which went furthest won the loser’s card. Even at an
early age you could tell who was going to be a gambler of the future.

I can recall one instance around 1974 when a rumour swept the school
like wild fire that the wee Asian shop keeper across from St. Anthony’s
chapel on the Govan Road was selling a new batch of cards. I had no
concentration for compositions or mental arithmetic as I could not wait
to get round to that shop and get my hands on the new set of cards.
When I arrived after school there was a commotion with some other boys
who were protesting that they had never heard of Eric Caldow or Dunky
McKay or the Third Lanark players whose team had actually gone defunct
seven years earlier. The shop keeper had obviously found a box of old
cards in a cellar and it was felt he was trying to pull a stroke by
selling them in the modern day but being Asian I don’t think he could
understand what all the fuss was about because to him football cards
were football cards. The irony is that these cards who no one was
interested in can fetch £5-10 each when sold by collectors and dealers
in good condition.

I only managed to complete one set and I remember the joy of opening a
packet and seeing Johnny Graham of Ayr United who was the one player I
required to have the full collection. Fulfilment does not even begin to
describe that feeling

The last card set was in 1979 when the Panini stickers were first
coming in to popularity. Perhaps the stickers where cheaper and easier
to produce and the glossy albums they produced became very popular. It
was the end of an era for young boys in Scotland so we’ll have a wee
look at some cards mainly from the 70’s.

Card 1 is the Dunky McKay one which caused consternation in Govan all those years ago. It was from the 1964 set.

Card 2 is the green backed 1970 set and shows the inimitable Bertie
Auld. On the back of the card there is a quiz question and you obtained
the answer when you rubbed a coin over the space.

Card 4 has the uniquely named Celtic goalkeeper Evan Williams in 1972 and you still need a coin to get an answer.

Card 5 sees a young Kenny Dalglish from 1973 and on the back you now have a statistics fact file.

A smiling Dixie Deans is on card 6 from 1974 and you’d better get your coin out again.

Tommy Callaghan appears in card 7 from 1975 in an unusual track suit pose.

Ronnie Glavin is shown from the 1976 set which has Ronnie’s career details on the back.

1977 sees Johnny Doyle and on the back the obligatory stats.

Joe Craig is pictured in the 1978 set and informs us that Joe scored an excellent tally of 23 goals the previous season.

The final set was produced in 1979 and you can see the novelty of Alfie Conn in a Celtic jersey in this one.

If in the odd chance there any sad cases out there like me (I know, I
somehow doubt it) who remember these cards then give us a shout if
there is one particular card you recall or a player that you’d like to
see. 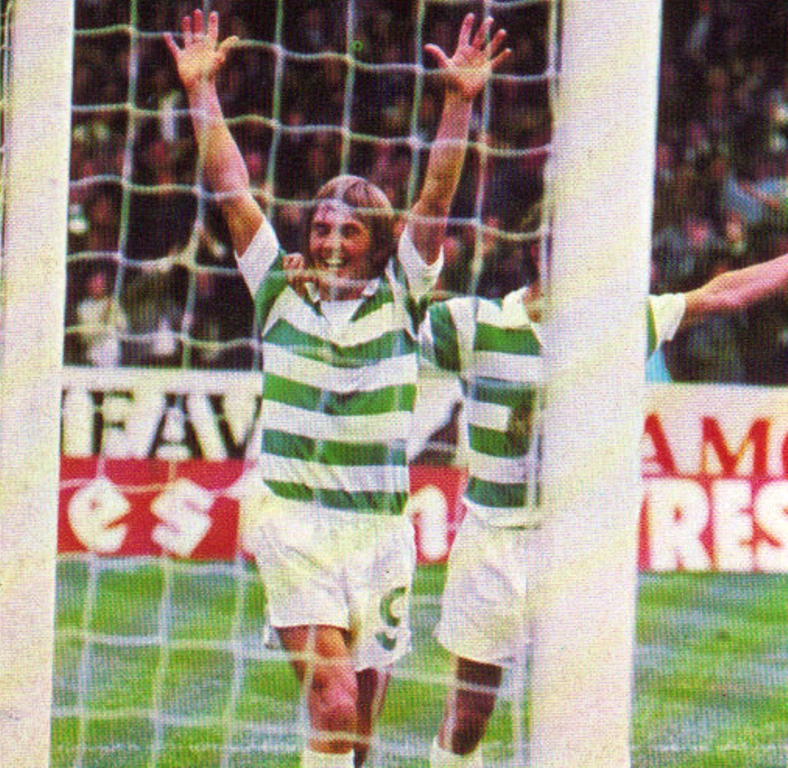