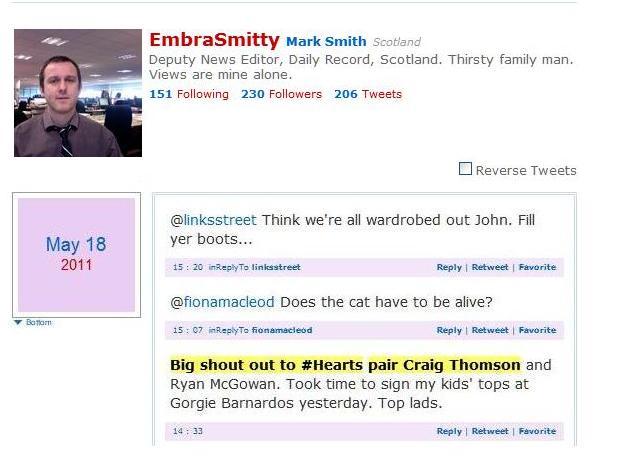 On June 16th, Hearts player Craig Thomson was placed on the Sex Offenders’ Register after pleading guilty at Edinburgh Sheriff Court to two charges of indecent behaviour. He was also fined £4,000 for his lewd, libidinous and indecent behaviour over the internet to two girls aged 12 and 14.

The story “revealed” that even after charges were brought against Craig Thomson, he continued to represent Hearts at events involving children.

“In May, a mum of two young Hearts fans let her kids get their shirts signed by Thomson and teammate Ryan McGowan and have their photograph taken with them at an autograph session in a Barnardo’s shop.

She didn’t know Thomson was facing trial over sex offences.

Her husband said: “When I explained the situation to my wife, she was furious. What on earth were Hearts thinking about letting him continue to represent the club at events involving kids?” Barnardo’s said Hearts had not told them about the court case.”

With Smith having “revealed” on Twitter that he sent his children to the Barnardo’s shirt signing did the Daily Record include the comments of a Senior Journalist and his wife without revealing their identities or their role in the fabric of the story?

On June 24th the Record ran another story on Craig Thomson outlining the Hearts fan’s fury that Craig Thomson had been given a reprieve by the club. One fan interviewed was Gordon Harrison:

Gordon Harrison, of the Longstone Hearts Supporters’ Club, said: “Most Hearts fans believe Craig Thomson should no longer be at the club. He is a disgrace.

In fact, Gordon Harrison seems to have been a regular “go to” guy when the Record wanted comment on Hearts stories.

@hertz77 Thankyou very much. See you in Inverness – for some reason the mrs is letting me go to this one.

The newspaper carried a back page headline asking: “WHO’S MORE HATED AT IBROX? (Is it Lennon or the taxman?)”.

“Clearly, given the year Neil Lennon and his family have experienced – with bombs, bullets, death threats and physical assaults – this kind of reporting is inflammatory, highly irresponsible and quite simply offensive.   For this newspaper to treat the matter in this insensitive and ill-judged manner is astonishing.

Celtic has today been inundated with complaints from supporters relating to this story and the Club fully understands their feelings on this issue.

There is no question, on the eve of a Rangers v Celtic match to use “Lennon, “Hate” and “Ibrox” in a newspaper headline is extremely irresponsible.

Neil Lennon, his coaching staff and the Celtic players are very disappointed at this reporting and have jointly decided that they will not be co-operating with journalists from The Daily Record.

It is only right that the newspaper delivers a suitable retraction and apology.

Neil Lennon as always will continue to receive the full support of everyone at the Club.”

The day before the Daily Record published their irresponsible story four Hearts fans were charged with racially aggravated breach of the peace in Perth Sheriff Court. It is believed they were Hearts fans returning from Inverness.

The four accused were:

All are presumed innocent until proved otherwise.

Again, it is unclear whether this particular Mark Smith is related to Hearts fan Mark Smith, the Deputy News Editor of the Daily Record. No mention has been made in the Daily Record of this particular story despite their usual interest in covering news stories which cross-over into the world of football. Perhaps, like Hearts were with Craig Thomson, they were simply unaware of the trial. 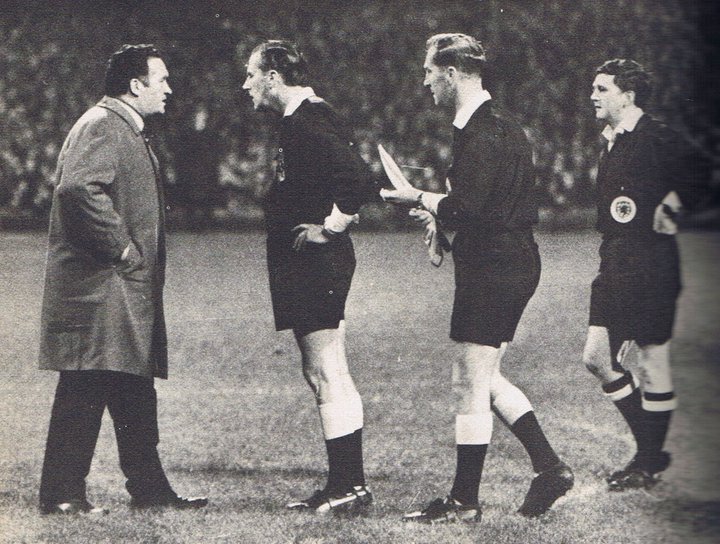