Despite his late arrival on the Friday Dom was thrown into the deep end the next day when Celtic played Rangers at Parkhead. He had a spectacular start to his Celtic debut when Celtic took centre and Dom found himself facing Alex MacDonald a matter of seconds into the game. Dom himself described it as thus :

From the kick off t 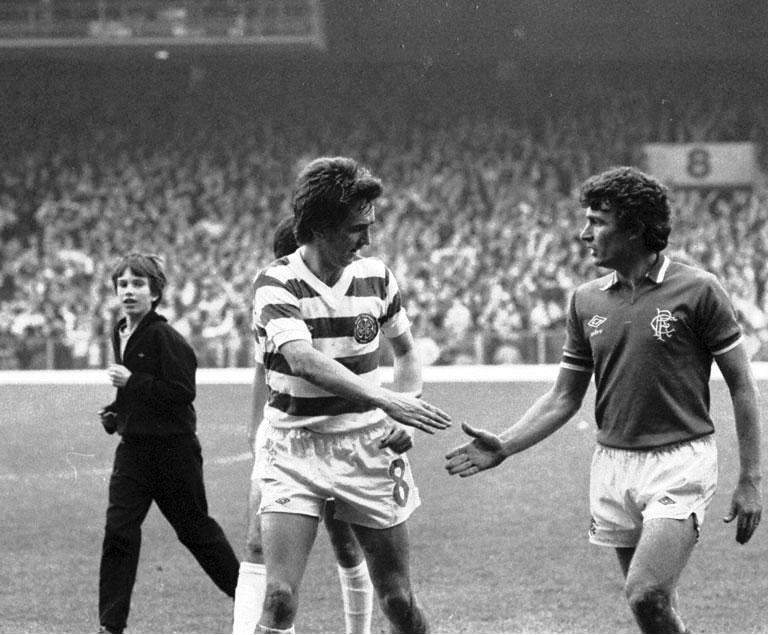 he ball was pushed back to me and wee Alec MacDonald that I’d had quite a few encounters with at Aberdeen – a wee terrier of a player, a wee hardy bit – he came in right away to sort me out. It was just instinct that I drew the ball back, took it round him and he slid past me. A big cheer went up and I pushed the ball out to Davie Provan and that was it. You were home ! But if I’d got caught there, if I’d got banged there, if he’d taken the ball of me – it was a fantastic start because the first touch was very important. It was only afterwards I discovered that George McCluskey was under instructions, if Celtic get the kick off, get the ball to Dom. I didn’t know that. I didn’t know I was going to get it. If I’d tried something in my head it might not have worked out.

(From the excellent book, Talking with Celtic, by Eugene MacBride)

The game itself was reported in the Glasgow Herald as thus :

Roddy MacDonald’s winning goal in the latest Old Firm confrontation at the weekend pushed Celtic six points clear of their great rivals in the Premier League table and helped to break an October jinx for manager Billy McNeill.

In his short spell as manager, McNeill has come to dread this particular month, and with good reason. Last season Celtic failed to win a single league match in October, dropping seven points out of a possible eight, but despite that they went on to win the Championship.

Events during the last few weeks did nothing to ease McNeill’s apprehension, but MacDonald’s goal on Saturday raised Celtic’s points total to five out of eight for the month and that has brought smiles to the faces of those at Parkhead.

Alan Sneddon was restored to right-back with Danny McGrain moving to the left and McGrain looked much more comfortable there. Roy Aitken went into centre of defence, which McNeill considers his best position, and was outstanding ; new signing Dom Sullivan brought a smooth, silky touch to the midfield, and Tom McAdam got through a mountain of work up front.

Admittedly, Rangers have been hard hit by injuries lately but they still managed to field a team packed with experience. Their European style, however, in which they conceded territorial advantage, suited Celtic. It made for long spells of boredom but you will not hear a Celtic fan complain this morning.

It might all have been different if Rangers had shown the same committment all way through as they did after MacDonald’s goal, for they gave Celtic’s defence more trouble in the final 10 minutes as they had done in the previous 80. But they did not, and therefore did not deserve to win.

Celtic, with Davie Provan right in the mood, spent most of the afternoon in the Rangers’ half, but due to fine work in Ibrox defence they were only allowed to create a few chances in that first half. But after an hour they began to find more gaps in the Ibrox defence and it became apparent that if any team was to break the deadlock then it would be Celtic, especially with the arrival of substitute Edvaldsson causing concern in the Rangers’ rearguard, and with 14 minutes left they did just that. Provan, that immaculate crosser of a ball, flighted over a perfect corner kick, and there was Roddy MacDonald soaring over everyone to head home that dramatic winner.

I have a few recollections of that game myself. Firstly, I well remember the consternation that Shuggie Edvaldsson caused in the Rangers defence when he came on as a substitute. With the Rangers players arguing about who was to mark him, Davie Provan slung over a cross where Roddy MacDonald was standing alone and ‘Roddy the Proddy’ thundered home a header.

I was in the main stand that day which in those days was not segregated. There was a lot of bother after the match and as we departed towards the car park I was struck on the leg with an Eldorado bottle thrown by rabid Huns perched on the top of the old bridge over London Road.

The next day the Sunday Post ran an article which catalogued the actions of an anonymous Ayrshire Rangers fan. The bold yin had a carry out on the early morning train and arrived in Glasgow well sozzled. After more drinking in Bridgeton he attended the game and afterwards he was found fighting in the city centre and was arrested. 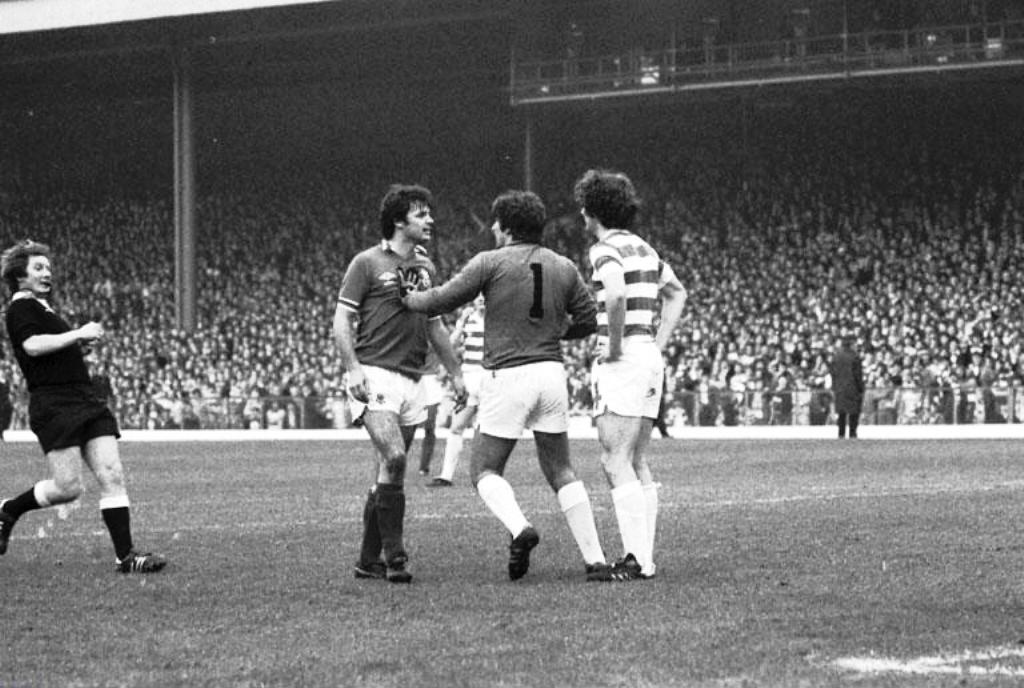 A thoroughly reprehensible character he was painted to be and it is to be hoped that Dom Sullivan and Roddy MacDonald’s efforts gave him a most unpleasant hangover behind bars on the Sunday morning.

The following Wednesday Celtic travelled to Dundalk in the European Cup and went through narrowly after a nervous display. Meanwhile Valencia flew over to Ibrox and thrashed Rangers 3-1 with World Cup stars Mario Kempes and Rainer Bonhof sharing the goals between them.

Celtic’s efforts would bring them a trip to Madrid to face Real in the Bernabeau. But that’s a story for another time…

Pic 1 is from an unusual angle which shows the Celtic fans behind the goal poised to celebrate as MacDonald’s header flies into the net. 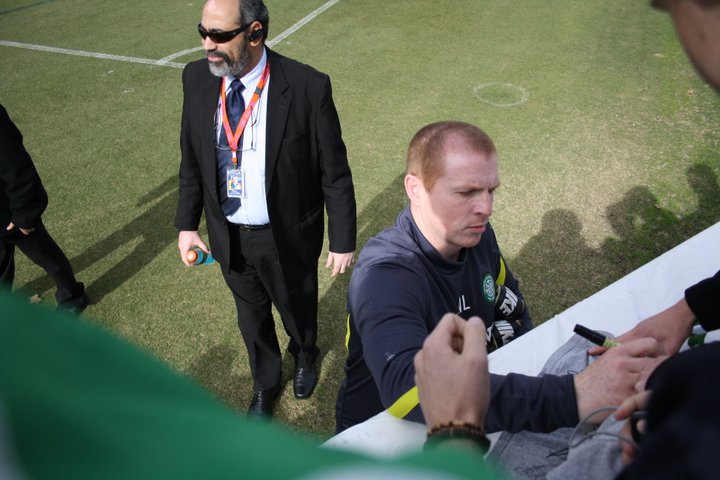