Now, if Scotland had chosen to be paragons of virtue and not accept the grandparent ruling you could maybe have understood this. But, no. Scotland elected to choose such mediocrity as Craig Mackail-Smith  and Jamie Mackie under the same ruling so the hypocrisy of the Scottish press and the Tartan Army is overwhelming. Many of us, me included, are in a similar position to Aiden with dual Scots-Irish nationality and had we became professional footballers we would have had a similarly difficult decision to make. I can’t honestly say which side I would have chosen.

In recent years only Neil Lennon received more verbal abuse inside Scottish football grounds than McGeady. The fact that Brian McLean, who declined Scotland in a similar vein to McGeady for Northern Ireland whilst playing for Rangers and Motherwell, received no barracking from opposition fans speaks volumes.

When he opted for Ireland Aiden McGeady said that his much loved late grandfather from Donegal was a huge influence on his decision. However he was also truthful enough to state that he believed Ireland had a far better chance of qualifying for the major tournaments than Scotland have. With qualification all but assured Aiden’s decision has been vindicated and, barring injury, Aiden will be ‘wearing of the green’ in Poland or the Ukraine this coming summer while Scotland are resigned to playing friendlies…in Cyprus.

Well done Aiden Bhoy. All of us at Parkhead are proud of you and may you do Ireland proud this summer. 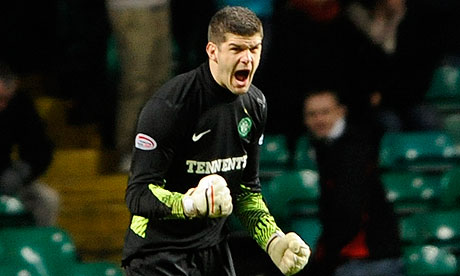