At the pre-season friendly against Sunderland I saw a player with some great touches but who couldn’t run the length of himself. If they are handing out first-team Celtic jerseys on that basis I was getting ready to join the queue myself, or thinking maybe a few of the Lions should be pulling on the boots again.

Then came the CIS Cup 4th round at Falkirk on 23rd September 2009. Coming off the back of poor performances in a home draw with Dundee Utd, a defeat to Hapoel Tel Aviv and a win over Hearts (courtesy of the last injury time winner we would see that season), Tony Mowbray decided to take the opportunity to introduce a few fringe players. Step forward Paddy McCourt, who turned in a virtuoso performance and scored Goal of the Season Candidate A, after taking possession near the halfway line and meandering past several opponents before lobbing the keeper with a sublime chip, which of course the Laptop Loyal credited to an imaginary deflection seen only through 3D orange specs.

Three days later, Celtic travelled to play St Mirren in the SPL keen to ensure we would take a lead into our first trip to Mordor. After 27 minutes of dull, stultifying play, McCourt picked up the ball 35 yards out, beat five St Mirren defenders before smashing the ball past Paul Gallacher into the corner of the net for Goal of the Season Candidate B, with the Laptop Loyal keen to emphasise the supposed ‘sub-standard’ defending of the home side.

By now I was a fully-fledged convert. Whilst hardly likely to rival Daley Thompson’s personal bests, McCourt now seemed to have just about reached the standard of fitness required of a professional football player.  At last we seemed to have found someone to share the ‘creativity’ baggage with Aiden. After the previous 18 months of giving it to Aiden or Naka and hoping for the best, we now had the prospect of another player with the flair and ability to unlock packed defences with a flash of brilliance.

This should’ve been the springboard to a productive season, however, sadly, these games represented the high watermark of McCourt’s involvement. The next two games were as crucial as any we would face that season – at home to the cheats of Vienna in the Europa League and away to the cheats of Govan in the SPL.

In an indictment of his tenure, Tony Mowbray unfathomably dropped McCourt from the squad completely for the Vienna game, favouring Niall McGinn and Chris Killen as attacking options on the bench. He was recalled as a substitute for the Rangers game the following Saturday, where he came on for Zheng Zhi, who having yet to be included in a first-team squad up to that point, was elevated to the starting eleven for his debut. The fact that Celtic failed abjectly in both games was of course not solely down to the absence of Paddy McCourt, however it did seem to be one aspect of the manager’s worrying lack of vision and focus.

The following week McCourt was given 14 minutes against Motherwell to rescue us from a stupefying and damaging 0-0 draw, and with his first touch beat three defenders to get to the byline and cut a dangerous ball back into the box. Two minutes later he forced Ruddy into a great save with a shot drilled from 20 yards. Unfortunately this was to no avail, although many Celtic fans were left pondering what such an attacking force could have achieved in the preceding 76 minutes of creative famine.

After a couple more substitute appearances it was back to oblivion, with the fans unsure whether he was injured or simply out of favour. On a ‘dreich’ January afternoon in Perth, he resurfaced for another substitute appearance to score goal of the season candidate C against St Johnstone in a 4-1 win, which even the Laptop Loyal couldn’t detract from this time. Having again shown his worth as a useful attacking option from the bench, Mowbray decided the logical thing to do was to consign him back to the stands. Great for the fitness this sitting in the stands stuff I hear.

McCourt hasn’t done much wrong in his fleeting appearances in what has been a dire season. In fact he’s provided more highlights than Samaras, Brown and Fortune put together, yet the latter were publicly backed by Tony Mowbray in the press whilst McCourt languished as a forgotten man. Willie McStay gave the Laptop Loyal a laugh when he described Paddy as a “Lubo Moravcik-type”, but then again, this would be the same Laptop Loyal that derided Celtic for signing the legend that is Lubo in the first place. Their only concern was getting a negative headline out of Celtic.

Certainly, I can see where Willie McStay is coming from. If given a free-role as Lubo was under MON, Paddy would be capable of damaging opposition defences whilst not requiring the aerobic capacity to get up and down the park all day. The trouble is, does the current Celtic squad have the kind of quality that would allow such a “luxury” player? Lubo had Petrov and Lennon to get around the park and win him the ball. Winning the ball and keeping it, seems to be a problem for us right now. And would the new Celtic manager have the inclination to deploy such a role? Our recognised “luxury” player, Aiden McGeady, is more often cast in a peripheral right-wing/midfield role and then expected to dominate games.

As it happens I’m writing this the day after McCourt has been given another 90 minute run-out against St Pauli and scored another wonder goal. The enigma lives on. Clearly there are aspects to McCourt’s ability as a professional footballer that previous managers have felt is lacking. His only competitive appearance under Neil Lennon was as sub in the Ross County debacle, continuing the pattern set under Mowbray and Strachan. The problem appears to be around basic stamina and fitness rather than injuries. The player himself told the media recently that the majority of time spent on the sidelines this season has been at the manager’s discretion and little to do with injury. In these circumstances speculation abounds – “he has a drink problem”, “he was a Dermot signing not a Strachan signing”. In a city as claustrophobic as Glasgow a drink problem would be hard to disguise – the Laptop Loyal would be going to town at the first hint – and if he wasn’t a Strachan signing then Mowbray and Lennon haven’t fancied him either.

This article comes at an apt time, as this really is a watershed in the career of Patrick McCourt. There is no doubt he has the ability to succeed, but the question mark remains about his fitness and ultimately his motivation. Is he mentally capable of pushing himself to get to where he wants or needs to be?

This reminds me of the debate over who is the best snooker player of all-time. There are those who argue for Ronnie O’Sullivan as he can’t be touched for flair and sheer skill, whilst acknowledging Stephen Hendry’s superior temperament. Well, for me, you can’t remove the mentality from the player. The respective titles won by each player negates the argument in my opinion. We need a player who can produce week in, week out, not just when the sun is shining, or when he’s playing his favourite position. The bottom line is, are you happy to be a Charlie Nicholas ‘flair’ player choosing lifestyle over trophies, or do you want to be Kenny Dalglish winning everything there is to win?

I am convinced Paddy McCourt has the ability to be a major player for Celtic next season. His contract ends in June 2011. This is usually the time clubs are making a decision on whether to sell or offer a new contract. He will be 27 years old in December of this year. Either he is going to push on and make a major contribution to the history of Celtic FC over the next few seasons, or he will drift away to the lower reaches of the English league, perhaps as soon as this summer, and retire in his early 30s.

I hope that the new manager gives him one last shot at proving himself with Celtic, but the clock is ticking. In these times of frugal transfer budgets he might just get it. 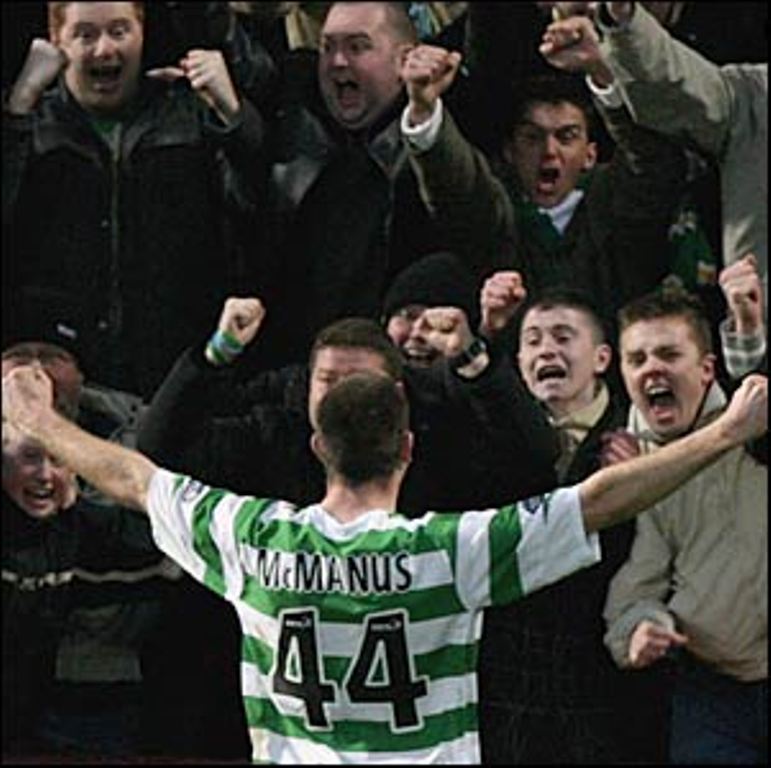