My memories of listening to Celtic games go back to the early 70’s and the irony is that despite Celtic’s tremendous success during that period it is the defeats and bad results that mostly stick in my mind which is unusual given that losses then were so rare.

At home the choices were to either listen to the big ‘wireless’ in the living room or depart to a quieter part of the house with the wee ‘tranny’ and hope that it wouldn’t frustrate the life out of you by running out of batteries during the game. Forget your internet and twitter this was hi-tech for the time.

My first real memory of listening to Celtic on radio was the 1972 League Cup final when a fine Hibs side defeated Celtic 2-1. There is always something frustrating about listening to radio commentary which makes you feel nervous and edgy. Every shot at the Celtic goal seems as if it will inevitably go into the net and there is a level of frustration that builds up which you don’t experience when you can actually watch the action taking place.

Perhaps the most vivid memory I have is listening in to the Celtic game at Ibrox in New Year of 1975. Celtic were top of the league and heading towards their 10th consecutive League title. Despite playing well in the first half Celtic went down 3-0 and I can still recall having total belief that my hooped heroes could pull it back even with only 15 minutes left. However as each minute passed by it became increasingly obvious that the game was slipping away. This game was the start of Celtic’s demise and there would be no 10 in a row and it was the first time that this boy realised that the Celtic players he worshipped were human after all and not the invincibles that that they had been shown to be in previous seasons.

If there was no scheduled sports programme on radio then your only option was to listen in to the sports desk on Radio 2 which was on every night faithfully at 9.55. In March 1978 I remember sitting at home listening to the announcer in his plummiest Home Counties BBC voice announce the result of that night’s Scottish cup score line – ‘Kilmarnock …..1.…Celtic …..0.’ Killie were a lower league side in the first division and that memory still causes be to wince until this day.

On a happier note there was the game at Tynecastle from 1976 when Celtic were 3-1 down at half time and all looked lost and many will recall that Willie Gibson scored a fine first half hat trick for Hearts. Hope then grew as Celtic scored once and then twice to level the scores. With minutes left Ronnie Glavin scored the winning goal to give us an unexpected 4-3 win as I bounced all over the room in ecstatic delight, carefully clinging on to my small radio.

Older Celtic fans of a certain vintage will recall Bob McDonald’s ‘World of Football’ page in the Celtic View where each week Bob would keep the fans up to date on the happenings in the major leagues across Europe something which the main newspapers would often neglect. In the late 60’s Bob advocated listening into European radio stations on crackly long wave in which a basic ‘O’ level standard of French could allow you to follow the adventures of the Bhoys especially in games against Nantes, Zurich, St Etienne and Basle. Letters to the View from that period confirm that there were people who actually had the enthusiasm and patience to do this.

Recently I had the pleasure to be introduced to Bob’s son who recalled his Dad’s obsession with European football and his devotion to his weekly column in the View. Sadly Bob passed on a few years back and his son lamented that his Dad would have been in his element with the vast choice of football now available from all over the world into your living room in this modern era via a satellite dish. Each Sunday Bob would faithfully travel into the City to purchase the foreign newspapers and then use his knowledge to pen his weekly column in the View. It’s no exaggeration to say that in those days Celtic fans were the best informed supporters in the country due to Bob’s devotion and there were many discussions over the years about the merits of the great sides of the era such as Ajax and Bayern Munich.

It does have to be said that the radio coverage back then wasn’t very extensive. Mrs Saint still recalls the great night from May 1979 when Celtic beat Rangers 4-2 (with only 10 men !) in which none of the radio stations covered because it was a postponed game played on a Monday evening and the radio stations were unwilling to change their schedules to cover the game at such short notice.

She listened intently to the Tiger Tim show on Radio Clyde who was keeping his listeners updated with the scoring and kept her Dad informed of the ups and downs of Celtic’s fortunes that night. She listened in disbelief as the bold Tiger (who was a real Tim as we all know) finally exclaimed over the air waves that the Celts had eventually triumphed by 4-2. That was of course the evening when the TV technicians went on strike and resulted in no film being taken of the game. This has only served to increase the legend of the ‘4-2 game’ through the years.

You don’t witness it very often now but during games back then you would see fans with radios huddled to their ears listening for the scores around the country, most notably Rangers, and a small shout would gather into a huge roar at Parkhead when word quickly spread of a goal against Rangers or even better news of their defeat. The last experience of this was this season on Christmas Eve when St Mirren beat Rangers at Love Street whilst the Celts were taking care of Kilmarnock at Parkhead but it’s seldom these days when Celtic and Rangers play simultaneously.

I can remember an afternoon in February 1985 when Celtic easily beat Inverness Thistle 6-0 in the Scottish Cup. At full time small pockets of fans huddled together listening to radio commentary from the Rangers v Dundee tie at Ibrox. Dundee were holding on to a 3-2 lead but a ridiculous amount of injury time was played and at approximately 4.55 the final whistle at Ibrox eventually went and huge roars were heard around the sparsely populated Parkhead terraces.

Despite the popularity of television there is still a place for radio especially when travelling by car or being at work where you can keep up to date with the fortunes of your team. In this computer age with satellite TV, the internet and mobile phones it’s good to know that ‘the auld tranny’ still has a place in the heart of the modern football fan. 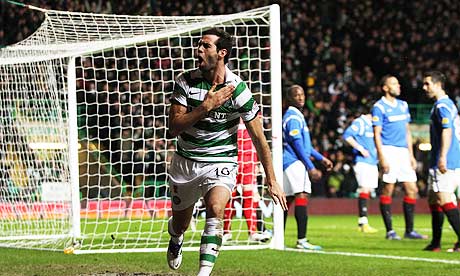