Paddy’s gift is a skill that has virtually gone from football since young players are having this aspect coached out of them from an early age. Players are told to look up and pass which is all very well but there is no better sight for fans than a player terrorising defences by running at them. Great players like Best, Johnstone and Giggs have achieved iconic status for doing what Paddy does when given the chance – beat the man!

Many Celtic fans think Paddy should be a bit part player called upon when things aren’t going right. This week’s events probably support that argument when he contributed more at Fir Park in fifteen minutes than he did when starting against Rennes. However I’m a big McCourt fan and I don’t think he has been given a proper chance to show what he can do on a regular basis. I mean has Paddy started five to ten games in a row for Celtic? I firmly believe that if we stuck by him and played him consistently on the wing then most defences we come up against will shudder at the prospect at dealing with both him and Forrest as Celtic’s wide men. Teams genuinely fear when people run at them as it’s simply not seen anymore. Most clubs in the SPL don’t have one player who can freely beat their marker, Celtic have two and need to start utilising both of them.

Personally I’m not a fan of playing McCourt in the hole behind one striker. I think he is at his best if he stays wide and cuts in. It surely can’t be worse than playing Commons who wouldn’t have created a goal if he had played 900 minutes at Fir Park on Sunday. My point is Neil could benefit by giving Paddy game time because there is something seriously wrong with Commons and we can’t afford any passengers on the park at the minute. With McCourt and Forrest running at people it will also take pressure off our shaky back four which has looked slightly more convincing this week.  Another point regarding the midfield is that Lennon needs to decide who his favoured two are in the middle of the park. Simply playing four centre mids across the park because they are talented doesn’t work. Just ask Mr Lampard, Mr Gerrard and various England managers who have tried to fit them in simply because they are quality players.

For the fans who doubt Paddy’s ability to last ninety minutes I propose this, give him a run of five games or so then judge his claim to a first team jersey. If he doesn’t produce or he continues to get injured then go back to using him as a bit part player. However if he does produce what we know he is capable of then Celtic can move Ledley into the middle of the park and leave out underperformers such as Commons and Kayal. Celtic are lucky to have one of the most naturally gifted players in the country. I propose we simply let him play. 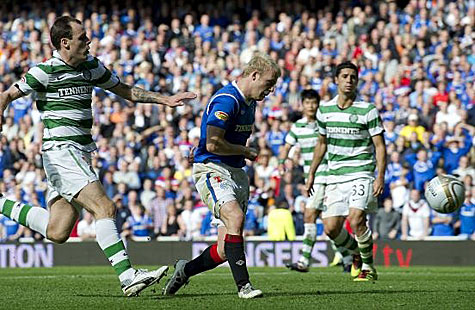