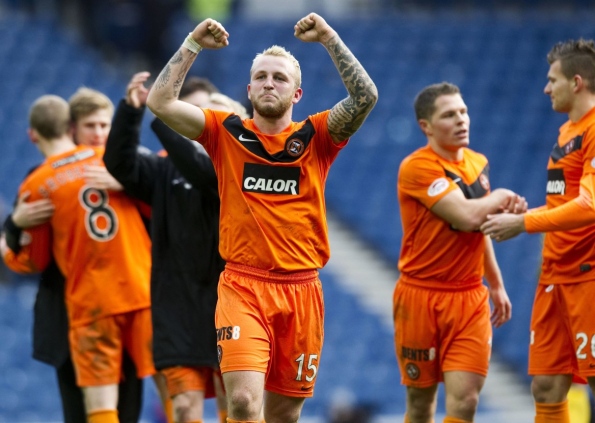 The orangemen were striding over Ibrox’s famous turf. Playing with pace and exuberance. Getting the ball down and hitting incisively on the break. However that wasn’t the orangemen the few poor souls doing the bouncy over in the corner wanted to be playing with a purpose and panache. The volume of task faced by those guys in lifting the “atmosphere” at the home of the champions is dwarfed by the size of task McCoist has to prove the following words regarding his only signing of the January window:

“He’s a crowd pleaser. He is the type the fans will like”

Unfortunately Ally it seems he is the type that Celtic fans will like. I thought it was LeGuen who gifted me the worst player I had ever seen in a Rangers jersey but it looks like his corpulent counterpart has went and undone him with a player of such a breathtaking lack of ability that I suspect he was only signed as he was a Ticketus employee and this was the demand he made or he would tell all to Traynor.

As the game went on the larger the smile grew upon my face. However as time wore on, and I watched Rangers kick anything in orange that moved, the smile was replaced by annoyance. I thought to myself if this is what Regan thinks the Scottish game needs we may as well close the doors as this is not football.

When you have a side that uses industrial tactics, and are state sanctioned to do so by the Refs and pundits who encourage this, is it any wonder we need somebody like Mark Wotte? The first thing he will say is “you don’t play football in this country”. Simples. The reason is for that is simply Rangers.

Sir Walter was allowed to assemble, for more money than anyone else, a team of hatchet men who were then each granted a licence to kill by the governing body. For 4 years the league has had to adjust to playing foot-rugby to try and play against Rangers.

This has meant managers such as Jim Jeffries and Craig Brown are sought after. Any other league in the world would have them after dinner speaking so you can reminisce about the bygone days of yore. Not here. We allow guys like Smith, Jeffries and Brown to shape the youth. Shape them into cauliflower eared, just boot it to f*** “athletes”. The destructive tactics have destroyed the league and the co-efficient. Our league rewarded tackles and the ability to get away with a bad one as opposed to rewarding skill and passing.

If Rangers go it will free the other sides to play like Celtic, or Dundee Utd today. Play football. With pace and skill.

Now Mr Regan is not a stupid man so he cannot be advocating this based on sporting reasons. That is patently obvious. Why it is being advocated is far more worrying and more sinister.

This is the legacy that Murray has left the Scottish game. The avarice was borne from the monumental ego of Murray and their jealousy of the one real star we wear with pride on our chests. We are being asked to forgive Rangers for their sins and return them to our bosoms as our game depends on it. That is an admission that their sins have infact jeopardised the entire Scottish game. The insatiable desire among their fans created by their owners bombast began a death spiral. For every fiver they borrowed a tenner. For every super casino and Ronaldo in the jet, they borrowed another tenner. Which is fine but at the same time as borrowing tenners they were telling the taxman it was actually only £2.50 but don’t worry as our stadium is worth one jazillion pounds, our auditors say so.

We have a club with a man at the helm who was willing to do anything to catch the rainbow he was chasing. He did this with zero regard for “the good of the game”.

We are being force fed the rubbish that we should allow a club in a self inflicted death spiral a reprieve as we might lose a TV deal. The day that happens is the day we have finally 100% sold the soul of the game. Maybe Regan is correct and the whole game would die but I would honestly prefer to see it all die with a clean conscience than watch what in my mind would be the Scottish WWE, which is what we would give birth to if that clubs actions are put aside.

Rangers aren’t a football team. They are a millstone. A rancid weight around the neck of the Scottish game. The sooner that rope is cut and the weight allowed to drop the quicker we can return the national game to a sport. A meritocracy. Where skill and sound management rather than cheating and favours gets you to the top.

If we are building the Scottish game with this club at the foundations it will be a matter of time before the subsidence brings the whole structure down. If the future is based on Rangers I want that Delorean. I want to go and do us all a favour and make sure that integrity rather than avarice is what matters.