We all have our gut feel as to what would make Scottish football better, or specifically what would enhance Celtic. With the arrival of the web and then social media we can all expend our opinions on this (me along with many thousands) yet I find some people ignore the evidence of their own eyes or have a “everyone else will do this” attitude. Perhaps the most common “solution” to the malaise of our fans is participating in a cross border league – The Atlantic League.

It sounded sexy and obvious – wouldn’t we rather be playing Malmo, Anderlecht and Ajax every week rather than Ross County, Inverness and Hamilton? Sexier games and better competition would attract better TV which gives us all more money so better players etc. It all made perfect sense except…

This season we have dropped into the Europa League and tonight we have the chance to qualify from the group stages with European football past Christmas – still an something I have experienced less than quarter of the time I’ve supported Celtic, yet the top tier will be shut. 40,000 max will be our attendance. I find this strange because the teams in Europa League football are exactly the type and standard of what would be the Atlantic League – In summary the Europa League is pretty much (slightly better) than the quality of any Atlantic League and patently there are 20,000 + Celtic fans for whom it simply isn’t “sexy” enough.

We can discuss all day what fans want – fans are different, we are not a homogenous group. I have heard people say the 20,000 empty seats every week are due to the lack of punishment for Rangers, others it’s the absence of Rangers, some say it’s the absence of decent competition, downsizing, lack of quality, lack of promotion, disconnect with our traditions. In truth it is all to a lesser or greater extent, but for me the two biggest factors are promotion/marketing and rivalry.

Look at the EPL and people go in vast numbers to watch a league where many games are utter dross but you can’t fault the hype machine that tells people it is a must see fixture. Being next to England where their media are the worst in Europe for decrying this competition we suffer from being told it’s crap. The other factor is rivalry, and specifically local rivalry. Fans want to go into work and parade their triumphalism over their workmate.

Previously on here I have made it clear that if our first game against new Rangers was the day before my 100th birthday it would be a day too soon, but patently many don’t share my view. The rejoicing in their demise, the jelly and ice cream parties…I’ve realised for many that was an extension of the rivalry with their mates and, as I say, patently from the response of many to the game in January they miss that. The general public prove time and again, what we SAY we want is often not actually what we really want. Man City are discussing increasing their capacity yet even with 2 for 1 deals they can’t sell out a champions league game. Why?   Because they CAN sell out for local rival games.

So the next time cross border leagues are proposed as our salvation pause, think. Do we REALLY want that? Do ALL fans really want that? If there is a cross border competition solution for Celtic in the near future I’ll be delighted, but not all will. Any cross border solution would have to include other Scottish teams. We will need local rivals. Attendances illustrate this. Do we want an Atlantic League? I’d enjoy it but by attendances tonight 20,000+ would rather play Sevco! 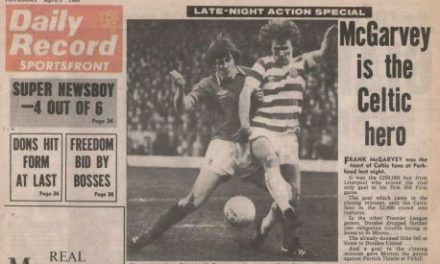