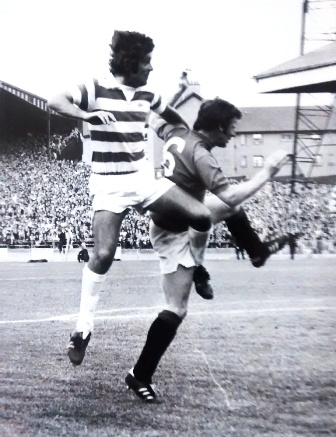 Stanton was the noted Hibs’ captain who had led the Easter Road side to a League Cup and two Drybrough Cup victories (ironically, all won in finals against Celtic). He had been a mainstay of the Hibs side since Stein himself was Hibernian manager in 1964 and Stanton had been at the forefront of the great Hibs’ victories of the period such as Napoli 5-0, Sporting Lisbon 6-1 and the legendary 7-0 win over Hearts at Tynecastle on new year’s day of 1973.

Although Pat was 32 and reckoned to be in the autumn of his career, it was still a huge shock when Hibs’ boss, Eddie Turnbull, allowed him to depart for Glasgow.  Stanton was not to be given an easy Celtic debut as he was chosen to play against Rangers in the opening league game of the season on a warm, sunny September afternoon in front of 57,000 spectators.

Rangers came to Parkhead brimming with confidence after winning the Scottish domestic treble the previous season and Jock Stein, with many young players such as Roy Aitken, Tommy Burns and George McCluskey at his disposal, saw Pat Stanton’s experience as a vital factor in their future development.

Celtic started the game in full throttle and forced four corners in the opening three minutes, yet Rangers took a 2-0 lead by the 34th minute with goals from Derek Johnstone and Derek Parlane. Both goals had a tinge of good fortune about them and Celtic fans could have been forgiven for thinking it was not going to be their day as Roddy MacDonald hit the Rangers bar and then Peter McCloy made a wonder save from a fierce close range Ronnie Glavin shot.

After half time the Celtic midfield of Stanton, Glavin and Tommy Burns took control and a steady flow of attacks rained down on the Rangers’ goal. In 54 minutes Paul Wilson gave Celtic hope when he scored with a mishit shot which, for once, deceived McCloy. This gave Celtic confidence and Rangers’ captain, John Greig, then made a desperate goal line clearance from Johnny Doyle to protect his side’s lead.

Pat Stanton’s calming influence in midfield played a great part in Celtic’s second half performance and he came close to scoring with a long range drive as Celtic continued to seek an equaliser.

With only three minutes remaining Tommy Burns slipped a fine pass to Paul Wilson, who raced past two Rangers players before firing a shot high past McCloy. The Celtic fans erupted with joy at salvaging a draw from being two goals down and the match finished with honours even at 2-2 and it was noted that the Celtic supporters were the ones heard making most noise at the end.

Paul Wilson deservedly took the plaudits after the match for his two goal haul but many observers were most impressed by Pat Stanton’s influence on the proceedings. ‘What a steal from Hibs! Here was the experienced player Celtic have needed for over a season, a player who can take and give a pass without any fuss, one who can inspire, encourage and direct the players around him. His contribution was significant.’ (Sunday Mail, 5th September 1976).

It was observed in later years that Jock Stein had made only one mistake when he had signed Pat Stanton – he should have done it many years earlier.